This year’s set of CEO Vision Awards go to an interesting mix of executives from across the technology industry landscape. John Chambers, Larry Ellison, Steve Jobs and Paul Maritz are all repeat winners and this year they are joined by EMC CEO Joe Tucci. Here’s a recap of Tucci’s leadership in 2010 from InternetNews.com. 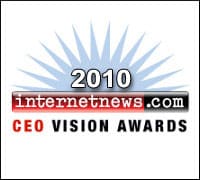 “Tucci’s prescience is seen in the outcome of acquisitions that seemed risky and/or overly expensive at the time, but that have paid off handsomely for EMC customers and shareholders alike. Tucci has also shown prescience in identifying a key trend in the IT market well before many others, including competitors: IT vendors can not focus only on core competencies but, rather, must branch out into as many segments of the IT stack as possible — a policy that Tucci has pursued very aggressively, particularly in 2010.

“Which brings us to Tucci’s boldness. Since he took the helm in 2001, EMC has made almost 50 acquisitions. Most of those were “string of pearls” or non-blockbuster acquisitions, in Tucci’s words, while others were blockbuster deals that raised the eyebrows of plenty of doubters at the time they were made. Examples of the latter include Documentum, VMware and RSA Security, all of which took EMC well beyond its roots in storage hardware and into the top echelon of IT vendors.

“Tucci continued in that tradition in 2010, surprising the industry with the acquisition of data warehousing specialist Greenplum in July. But that wasn’t the only big surprise this year, as EMC recently opened its wallet wide to buy the relatively unknown Isilon Systems for $2.25 billion, solidifying the company’s competitive position against vendors such as IBM, HP and NetApp.

“But even EMC knows when it’s time to partner in the fast-changing IT world, as evidenced by the partnership with VMware and Cisco forged a year ago. (EMC owns 80 percent of VMware and Tucci is chairman of the board of directors).

“This year, Tucci’s vision of product diversification and acquisitions resulted in EMC’s third consecutive quarter of record revenues when the company posted $4.21 billion in sales — an all-time record for EMC — and net income of $649.4 million, a 35 percent increase over the previous year. Those numbers put Tucci and company on the path toward revenue of $17 billion in EMC’s current fiscal year.

“As CEO Vision Awards advisory board member Charles King of Pund-IT put it:

“‘Tucci has continued to drive his company to significant leadership positions in its traditional enterprise storage markets while opening up new opportunities with dynamic, often counterintuitive acquisitions (Mozy, Iomega, VMware and, most recently, Greenplum). It’s hard to think of another company (or executive) with such a successful acquisition history.’”

The manufacturer will highlight a range of AMD EPYC 7003-powered platforms for AI, cloud, and storage applications.
Read more
News

Many of the compliance systems that companies have to deal with require the same kind of actions, processes, and plans. Here are key elements.
Storage Management

Using DNA storage for digital data is a well established idea. Here’s how it could come to full fruition as acceptance widens.