Gartner recently came out with a Magic Quadrant for deduplication backup target appliances.  As can be seen in the chart below, the analyst firm named EMC and HP as leaders, with Quantum and Exagrid also receiving good grades.

Gartner’s take on this market is that these vendors have developed duplication appliances which are now being heavily used as backup targets, thereby reducing the need for tape in the backup process.

According to Gartner analyst Pushan Rinnen, 50% of applications with high change rates will be backed up directly to deduplication target appliances by 2018, bypassing the backup server, up from 10% today. 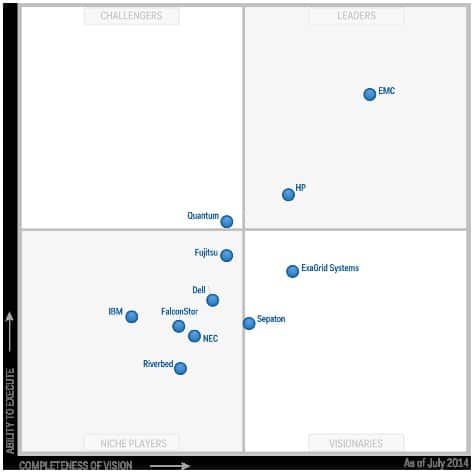 “Due to the high duplicated nature of traditional backup jobs, which are often implemented as daily incremental backups with a weekly full backup, deduplication backup target appliances can often achieve 10-times to 30-times the storage capacity reduction ratio,” said Rinnen.

Gartner estimates place the deduplication appliance market at $1.74 billion in revenue last year. That’s a growth rate of 18% over the previous year.

“While EMC continues to claim the lion’s share of the market, late-comer HP is making good progress, and Fujitsu reported some large-scale adoption in Europe and Japan,” said Rinnen. “Quantum remains a solid contender, whereas Dell is ramping up its DR series appliances for SMBs. ExaGrid and Sepaton are positioned as Visionary vendors due to their innovative architectures.”

Let’s take a look at some of the leading contenders in more detail.

Exagrid believes that deduplicating backups during the backup process (inline) it too compute-intensive, resulting in a longer backup window. To overcome this, ExaGrid uses a landing zone where backups can land straight to disk without inline processing, resulting in fast backups and a short backup window. Deduplication and offsite replication occur in parallel with backups so they never impede the backup process, as they are second order priority.

“Instant VM recoveries occur in seconds to minutes versus hours using the inline deduplication approach,” said Bill Andrews, CEO of ExaGrid. “Using our technology, the backup window stays fixed in length regardless of data growth and negates the need for expensive and disruptive forklift upgrades.”

ExaGrid offers a total of nine appliance models, which can be mixed and matched into a single grid. This can scale from a 1 TB full backup up to a 294 TB full backup in one grid. It also allows for replication to a second site for disaster recovery as well as enabling multiple data centers to cross protect between each other. The list price for the ExaGrid EX7000 appliance is $29,000, whereas the EX13000E is $42,000, and the EX21000E is $59,000.

Gartner saw ExaGrid as being successful in the midmarket and in small enterprises, and thought its grid architecture offered pay-as-you-grow benefits, as well as having deeper integration with Veeam than many competitors. But the analyst firm saw limitations in its reach beyond North America, as well as limited cloud support.

The Quantum DXi Series utilized the StorNext 5 file system to accelerate storage workflows and simplify data protection. The company recently streamlined its disk backup/deduplication portfolio based on three platforms – the DXi6900 for midrange to enterprise environments, the DXi4700 for SMB to midrange implementations, and the DXi V-Series for virtual environments.  The DXi6900 with 17 TB usable capacity has an $88,000 list price, the DXi4701 with 5 TB is $16,000 and a free DXi V1000 virtual deduplication appliance is available to store up to 15 TB of deduplicated data.

“Quantum recommends that IT departments include data encryption as part of their core protection strategy, and should integrate the technology into existing backup, recovery, and archive processes,” said Casey Burns, Product Marketing, DXi, Virtual and Cloud Solutions, Quantum.

As such, Quantum provides self-encrypting 4 TB drives in DXi Series models using AES 256-bit government grade encryption that is performed by the drives without performance impact. A recent development is capacity-on-demand licensing. For example, this enables users to scale a DXi6900 from 17 TB to 510 TB without any licensing complexity. From one Quantum appliance, users can replicate to Quantum’s Q-Cloud Protect data center as a means of offsite protection. If the data is deduplicated, Burns characterizes the cost at pennies per GB per month.

Other products are available offering different capacity and performance points through to HP’s flagship StoreOnce 6500. It offers the highest availability with failover and autonomic restart for those who want to ensure their backups don’t fail. This product scales to 1728 TB of usable space prior to deduplication and restore speeds up to 75 TB/hr. Prices start at $375,000.

“Consider a holistic approach to data protection,” said Andrew Dickerson, senior marketing manager, backup, recovery and archiving solutions, HP Storage. “It may be that your organization can move some of its primary data to a different type of storage enabling the business to use that data for intelligence purposes, to help move the business forward while at the same time backing up less data each day, to a deduplicating appliance.”

Gartner felt that StoreOnce had good integration capabilities with backup applications such as HP Data Protector and Symantec OpenStorage Technology (OST)-based applications, but saw some weakness in entry-level and midrange models.

Gartner noted that EMC has achieved commercial success with Data Domain deduplication backup appliances, which offer a variety of configurations, deduplication capabilities and ingest speeds. The analyst firm called it the “broadest ecosystem of backup and enterprise application support, including deeper integration with EMC’s Avamar and NetWorker via Data Domain Boost.”

But Gartner also noted some customer gripes around pricing, and the lack of a scale-out architecture for easy upgrades and migration.