In today’s enterprises, often the whole point of collecting and generating data is to capture its value and capitalize on it. That requires moving it from storage systems to servers or other systems across a network for processing, which typically means that some form of storage networking is at play.

There are various forms of storage networking, including network-attached storage (NAS) and storage area networks (SANs). Essentially, they all deliver data services from external storage systems across a network and allow multiple users or devices to share storage capacity.

Here’s a sampling of the terms and storage networking technologies found in today’s businesses and data centers. 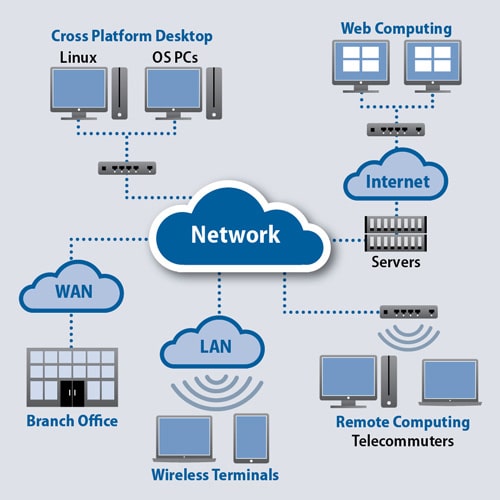 Enterprise storage networking has a huge task: connecting the many far-flung elements of a modern company.

As with most IT decisions, planning and deploying a NAS or SAN deployment is highly dependent on your organization’s business and performance requirements.

NAS makes a compelling case in practically all sorts of business environments, from small firms to large enterprises. NAS can be used to provide users and their devices with secure, shared access to files, easing collaboration.

Even with the advent of cloud-based file storage, sharing and sync services, NAS makes sense for organizations with strict security or compliance regulations, or that simply want full control of their organization’s data. That said, many storage vendors today sell cloud gateways and appliances that blend low-cost cloud storage costs with the security and enterprise management capabilities of on-premises NAS environments.

For larger organizations that run databases and mission-critical business software, like enterprise resource planning (ERP) and customer relationship management (CRM) software suites that store and retrieve block-level data, a SAN is practically a given.

Reflecting its HPC origins, InfiniBand is best suited for environments that run extremely critical workloads. Finally, small and mid-sized businesses that find themselves in need of a SAN will likely find iSCSI-based solutions to fit their more modest requirements.

Storage networking is a field that borrows from many disciplines and technology categories to help data flow across a network to the various systems that make a business tick.

Talent-wise, a successfully deployed storage networking project typically involves the input of IT leaders who are familiar with the data requirements and application workloads generated by an organization’s various business units. Networking teams are critical to ensuring that a NAS or SAN plays well with an organization’s other network resources.

Compliance officers and IT security personnel will likely want to have a say on how data is safeguarded as it is stored on a NAS or works its way across a SAN. Of course, storage administrators will manage and maintain a SAN according to their organization’s standards.

Vendor lock-in is always a concern. Although networked storage environments are typically built on established and well-known technologies, individual vendors add their own spin. This can affect how the data and storage operations of a NAS or SAN is managed, making considering a switch to another vendor or a major technology upgrade a challenge.

Finally, keep an eye on the horizon in building your storage networking infrastructure.

Data volumes continue to grow by leaps and bounds as businesses collect more of it to feed into big data processing and artificial intelligence systems to wring from value out of their information. Emerging new standards, faster interconnects and innovations that boost storage capacity and performance will inevitably change the storage networking market in the years to come.

Storage Area Networks in the Enterprise

Mapping Out a Hybrid Multicloud Strategy

Moving to a hybrid cloud architecture comes with challenges. Here is what you should know for a successful migration.
Read more
Storage Management

Data fabric has become one of the most commonly used, and perhaps most-hyped, technology architectures of the last few years. In fact, after Gartner...
Read more
Facebook
Twitter
Linkedin
WhatsApp
ReddIt

The move by Amazon Web Services is designed to deliver performance-intensive, mission-critical workloads into the cloud.