Early solid state drives (SSDs) simply slotted into existing hard drive slots in storage arrays, servers, and PCs. While this form factor remains popular for SAS and SATA drives, smaller PCIe and M.2. form factors can move the power of flash closer to the CPU. M.2 form factors, which easily slot and screw onto a motherboard, have become extremely popular and common.

NVMe SSDs enhance the speed of the SSD via modern data transport protocols. And this speed has caught the attention of storage admins: the fastest NVMe is typically viewed as the best NVMe. Other features are important too, though, including warranties, heat dissipation, and overall reliability.

Flash is blurring the lines between memory and storage, meaning that SSDs are emerging as memory-class storage. Instead of storing data on a slower storage layer, it is retained in memory. Memory is expensive, but the employment of flash makes it more economical.

The following products showcase the best SSD in a variety of formats. These products come from a range of top SSD vendors, including Samsung, Western Digital, Sabrent, ADATA, and Crucial.

The EVO Plus, an improvement on the 970 EVO, released in 2019 and quickly impressed storage gurus (although there’s some debate about how much exactly it improved on the EVO). It features 3500 and 3300 MB/s sequential read and write speeds. Samsung also has a thermal throttling method that forces the SSD to slow if it starts to overheat.

One confusing thing about Samsung’s family of NVMe SSDs: the EVO Plus is cheaper than the 970 Pro by quite a lot, despite being newer and a bit faster. It also offers a 2TB size, while the Pro only has 512GB and 1TB. Buyers won’t be complaining about the price difference, of course, and it’s part of the reason the EVO Plus replaces the 970 Pro in this spot on the list (we previously listed the Pro here). The EVO Plus is a stellar SSD, a fantastic choice for buyers searching for a high-performing PCIe 3.0×4 M.2 drive.

The fastest in the market overall, the 980 PRO is hardware giant Samsung’s most recent foray into NVMe speed. Its top read/write speeds promise to top out at 7,000 MB/s and 5000 MB/s respectively, unheard-of rates until recent years.

The 980 PRO has received criticism for being flawed, partly because it doesn’t have a typical heatsink (just nickel coating). And yes, it’s quite a bit more expensive than its NVMe competitors. But it deserves a mention on this list for its incredible speed. It’s also recently added a 2TB version to its lineup; initially the 980 PRO’s highest offering was 1TB, which could have been an issue for some who need more storage. But Samsung has done away with that particular problem. If you’re searching for the fastest M.2 NVMe SSD on the market, look no further than the 980 PRO.

In our view, “best SATA SSD” is a tie between two relatively new units. Though NVMe-based drives are making more and more sense for high-performance computing needs, SATA is a little cheaper, and some older motherboards don’t support NVMe or PCIe. There’s still use for SATA, and these two drives appear near the top of the list.

The 870 EVO is one of Samsung’s most recent releases and one of the best SATA SSDs on the market. Its drive size ranges from 250 GB to 4TB. Read/write speeds reach 560 and 530 Mb/s respectively, one of the better records for SATA drives. Even with a new non-NVMe SSD release, Samsung continues to impress. 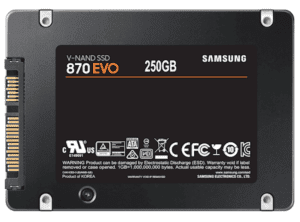 The Crucial MX 500 features up to 560 read speeds and reasonable to low prices compared to its SATA competitors. It’s an especially good choice for users who have computers that only support SATA but who also need high performance. The MX 500 comes in sizes up to 2TB. If you need reliability and speed in your SATA SSD, the MX 500 is one of the best drives you can find.

The 860 PRO, another 2.5″ SSD, is one of the overall best SATA options for speed. You’ll pay for that speed—the 860 PRO is quite expensive when compared to its competitors. The PRO offers 560 Mb/s in read speeds and 530 Mb/s in write.

The PRO is a reliable SSD for processing large amounts of data. It’s also a solid choice for gamers who want speedy performance. The 860 PRO is a trustworthy and high-performing option for those who still use SATA heavily. 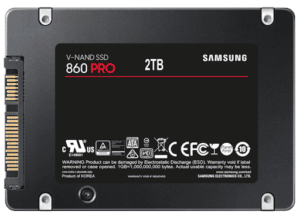 This SSD from Western Digital wins best PCIe SSD because of its overall popularity and high speeds. Though not as fast as Samsung’s NVMe SSDs, the Black SN750 is a mid-range priced drive, so it’s a bit of a trade-off if you’re looking for a reliable, well-designed SSD. Buyers can choose between a heatsink or none and up to 4 TB of storage. The SN750 tops out at sequential read and write speeds of 3400 and 2900 MB/s.

True, it’s not a Gen 4 PCIe drive, but PCIe 3.0 is still heavily used among the best NVMe SSDs, including the 970 Evo Plus. This shouldn’t be a concern for most users, who will still notice impressive speeds and durability from Western Digital’s SN750.

Sabrent’s newest PCIe SSD has a 4.0 interface just like the Rocket NVMe 4.0 before it. Put simply, the Rocket 4 Plus is just really, really fast. A 2TB Rocket boasts 7100 MB/s sequential read speeds and 6600 MB/s sequential writes. It’s pricier than the comparable Samsung 980 PRO, but that doesn’t take away from its impressive speed and quality.

The Rocket 4 Plus overlays copper on the heatsink for added cooling. For buyers who register, it has a 5-year warranty. The Rocket 4 Plus is only usable in computers that support PCIe Gen 4, but for those that do, it meets some of the highest-performance computing needs.

The XPG SX8200 Pro is one of the most reliable SSDs on the market. It’s a PCIe 3.0×4 drive with an M.2 form factor, heat sink, and E2E data protection. It’s not as fast as its extreme-speed counterparts—its random access speeds especially are lower than other PCIe SSDs—but the majority of users won’t need that level of performance. The XPG SX8200 Pro also offers a five-year warranty, adding to the comfort buyers will feel investing in this drive. It’s a good SSD for the money and offers long-lasting value and performance.

SK hynix, a South Korean hardware company that makes chips, has done well with its first NVMe drive: the Gold P31 easily keeps up with the SSDs in its class, topping out at 3500 MB/s for  read speed. It works for either desktops or laptops. The Gold P31 offers up to 1TB of storage, which may not meet the requirements of buyers looking for highest-capacity SSDs, but for anyone else it’s a fast and financially sound choice.

This article was updated February 2021 by Jenna Phipps.