All-flash storage is clearly on the up-and-up. Gartner analyst Valdis Filks predicts that by 2020, 50 percent of data centers will use only all-flash arrays (AFA) for primary data, up from less than 1 percent in the middle of 2016. Overall, Gartner expects flash to be the dominant form of enterprise storage within a couple of years. By 2020, the firm predicts all-flash array revenue will reach $9.67 billion.

Who dominates in this field? Just about every vendor says they are number one. Cutting through the hype, what do the analysts say about who leads the way in all-flash arrays (AFAs)? Analyses by both International Data Corp. (IDC) and Gartner agree on some points. For example, both list the top AFA vendors as Dell EMC, Pure Storage, IBM, NetApp and HPE, though not necessarily in that order.

Gartner favors the Magic Quadrant (MQ) approach. In its most recent MQ for Solid-State Arrays, it placed Pure Storage then Dell/EMC as being out on front. But HPE, NetApp and IBM also made it into the Leaders quadrant. Kaminario (rebranded as Silk), Tintri and Tegile gained a position in the Visionaries quadrant, with Hitachi Data Systems classified as a Challenger.

IDC analyst Eric Burgener expects all-flash arrays to dominate primary storage market spend by 2019. He’s working on the latest AFA MarketScape, which is due out later this year. He listed the top AFA performers by revenue share (at the end of Q3, 2016) as being Dell EMC at 34.8 percent, then NetApp at 18.7 percent, HPE at 13.4 percent, Pure Storage at 12.9 percent, IBM at 8.6 percent and the rest at 11.7 percent. (Kaminario leads in this latter grouping.)

Certainly, the Dell EMC merger has propelled the company well ahead of the others. But it should be noted that NetApp has been performing very well over the past year, has moved rapidly up the standings and could give Dell EMC a run for its money. 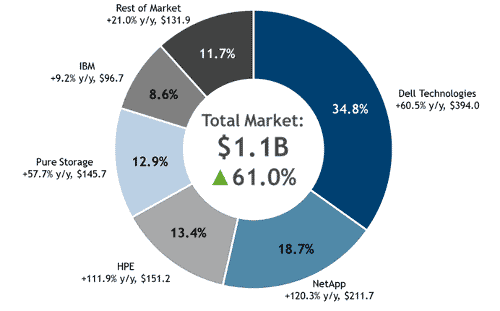 “The runaway single product revenue leader by far is EMC XtremIO, which as of 4Q16 was on a $2 billion run rate,” said Burgener.

How does that compare with the competition? IDC numbers indicate that some other single products are starting to approach $500 million, but it’s hard to gain an accurate count as most vendors don’t want to break AFA revenues out by specific product.

That’s the picture on the revenue front. But the “top” product can be defined in other ways, and here’s where it gets a little subjective. Grading features, for example, can be challenging because that often depends on what a user specifically wants to use the product for. Those wanting to host a webscale app on all-flash, said Burgener, are more likely to favor a scale-out design built on top of commodity off-the-shelf servers and storage. Kaminario K2 is an example of this kind of AFA.

But there are many other factors. If a company is an IBM shop, they may well gravitate toward a product that leverages all their pre-existing IBM administrative skills. In that case, IBM FlashSystem V9000 is a good candidate. Alternatively, a cloud provider that cares most about its ability to meet service level objectives would be most desirous of an all-flash array with the most mature quality of service (QoS) controls.

Burgener said there are just too many facets to the market and too many nuances to storage environments for a single top product to dominate.

“Some may view the top AFAs as offering pretty much the same feature sets but really care most about the customer experience, in which case Pure Storage might come out ahead,” he said.

Another example might be value: Some may want the most IOPS regardless of price. Others may be searching for the most IOPS and raw flash capacity, but demand price point of under $50,000. In that case, Burgener points to the Seagate RealStor 5005. It delivers 300,000 IOPS and 20 TB of raw flash capacity. But he added the caveat that it is a new system that lacks maturity.

“When you say ‘top’ products, how you define ‘top’ makes a significant difference in who makes the list,” said Burgener.

How will the AFA market look in a few years? Gartner anticipates more market entrants, plenty of consolidation, as well as several vendors exiting the AFA space. Regardless of the turmoil, sales will continue to be brisk. But who will lead the way by 2020 is anyone’s guess.

IDC views the market as maturing. As a result, Burgener believes that all the top market-share holders pretty much support the same basic feature set. Their systems are primarily being bought now for mixed primary workload consolidation, according to IDC research.

“That means that, except for certain specific customer requirements, what seems to be determining who is successful are the go-to-market strategies, not what features they have,” said Burgener. “This gives the larger players with more market power and distinct advantage.”

As for consolidation, Burgener noted that four of the top five market leaders by revenue have already gobbled up AFA start-ups. The top five offer a portfolio of all-flash products and each advocates a flash-first strategy for enterprise storage. On the downside, however, their gains in AFA revenue are being offset by the pain of declining hard disk drive (HDD) revenue.

“Although the top five AFA vendors by market share did not change from our previous report, it is clear that market maturity is shifting the factors that drive market success,” said Burgener. “With comparable feature sets across these vendors’ products, what will be important going forward is a breadth of AFA portfolio offerings along with a committed focus and ability to execute on a ‘flash-first’ sales strategy.”

IDC recommends that organizations look at all-flash to replace existing storage once it comes up for a technology refresh. Even secondary storage applications that may not be so latency-sensitive can benefit from flash bandwidth and/or throughput to drive better business outcomes, he added.