When it comes to SSD vs. HDD speed comparisons, SSDs clearly has the advantage. However, historically the higher cost per Gigabyte of SSD storage meant that the benefits of higher SSD speeds were restricted to a few applications where the cost could be justified.

Today, though, the price differential has narrowed significantly. And with the significantly higher SSD speeds in contrast to HDD, the popularity of SSD storage, often known as ‘”flash,” is exploding. Businesses are now focused on getting the best flash array.

SSD vs. HDD Speed and Performance

Solid state drives (SSDs) are faster than conventional hard disk drives (HDDs) and they are also more reliable and use less power. That means that when it comes to choosing between SSD or HDD storage, SSDs would be preferably to HDDs in all cases if it weren’t for one fact: SSDs are more expensive than HDDs when measured by cost per Gigabyte of storage. 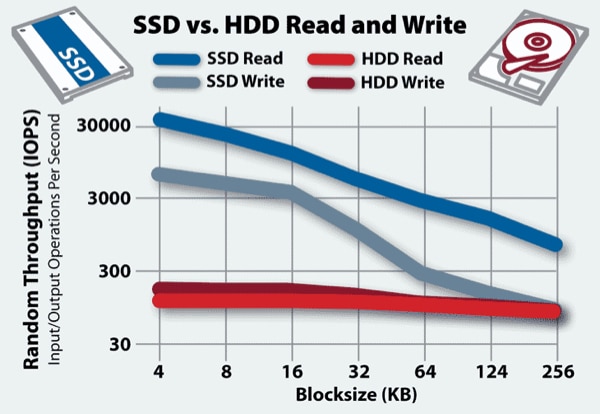 How a Hard Drive Speed Works

An HDD is made up of a number of spinning magnetic platters that stores data, and a number of read/write heads on mechanical arms that move over the surface of the platters. To read or write data at a specific sector of a platter, the head has to move to the appropriate position, and then wait for the sector to pass underneath it as the platter rotates.

This mode of operation presents two obvious sources of delay:

The seek time depends on where the head is at the start of an operation and where it has to move to, and the latency depends on the position of the disk in its cycle, so for a given HDD it is normal to talk about average seek time and average latency.

One more potential source of delay is the HDD interface through which data on the drives is transmitted to a connected computer or storage system. But common interfaces such as SATA and SAS have been designed with hard drive performance in mind, and these tend not to be a limiting factor to HDD read and write speeds.

When it comes to hard drive speed measurements, there are four that are important:

The way that an SSD drive works is completely different than a HDD. It uses a solid state storage medium, typically NAND (often known as flash), and data is written to or read from the NAND by a controller, which effectively is the brains of the device.

With an SSD there is no variable seek time or rotational latency, as every part of the SSD can be accessed in the same amount of time. But SSD read and write speeds are asymmetric: data reads are very rapid, but SSD write speeds are somewhat slower.

The problem is that data cannot be written to a cell unless it is first erased, removing any existing information, and while data can be written one page at a time, it can only be erased in entire blocks at a time. That means that to write a single bit of data to a cell it is necessary to copy all the pages in the block containing that cell to a holding area, erase the entire block, and then write all the pages and the new bit of data back to the erased block.

Is an SSD Faster than an HDD?

The simple answer to this question is yes, and the reason is that the solid-state nature of SSD storage gives it a huge speed advantage over the mechanical design of HDD storage, with the inherent delays that it entails.

How much faster is an SSD? The answer of course depends on which SSD and HDD you compare and what exactly you are comparing. An SSD speed comparison will reveal that there is a wide variation between SSD speeds.

But to get an idea of the performance difference an SSD v HDD speed comparison could reasonably show, a standard SSD can read sequential data at a speed of about 550 megabytes per second (MBps) and write it at 520 MBps. In contrast, a fast HDD may carry out sequential reads and writes at just 125MBps.

That shows that the difference between SSD and HDD performance is significant. The answer to the question of how much faster an SSD is compared to an HDD? About four times faster when it comes to SSD vs. HDD read speed, and a little less when SSD vs. HDD write speed is compared.

Historically, SSDs have been designed to be drop-in replacements for HDDs, and that means that they are often made with the same interfaces as HDDs, which in practice means a SATA interface, or on more high-performance systems, a SAS interface.

These interfaces have been optimized specifically for HDD storage devices, but they are suboptimal for SSDs. “Interfaces do get in the way for SSDs,” says Jim Handy, an analyst at Objective Analysis, “and that’s why we are seeing PCIe SSDs.”

The effect of size on speed: SSD Interfaces

To get an idea of the benefit of a more SSD-friendly interface like PCIe, consider this. The SATA 3.0 specification only allows SSDs to reach a maximum data rate of about 560MB/s. By contrast the PCIe 3.0 interface allows speeds of 985MB/s per lane. (The SSD’s controller is connected by multiple lanes to different NAND chips where the data is actually stored.) Even though an individual NAND chip is unlikely to be able to work at a 985MB/s, a device with 8 chips on separate lanes can easily offer 3000 MB/s aggregate throughput.

How to make SSDs faster

Another way that SSD speed can be increased is to use faster NAND. Standard NAND used in SSDs is effectively flat, and performance-sapping error correction algorithms are used to mitigate against data corruption caused by cell to cell interference in closely packed cells. But new flash chip technology uses multiple layers of memory cells (known as 3D NAND) and this offers the potential for faster SSD read and write performance. That’s because it’s not necessary to run these algorithms in 3D NAND, and chip-maker Samsung says its 3D NAND is twice as fast as conventional planar NAND when it comes to SSD write speed.

The difference between SSD and HDD read speeds can be enhanced further by moving away from NAND altogether, and instead using SSDs which are equipped with a new storage medium called 3D XPoint, jointly developed by Intel and Micron.

The biggest delays that limit HDD speed are seek times (the delay as the read/write head moves into position) and latency (as the hard drive waits for the required part of the disk to rotate into position under the head), as explained earlier.

So it follows that by reducing these two factors, the difference between SSD and HDD performance can be narrowed.

How to make HDD speed faster

The way to reduce latency is relatively simple: increasing the rotation rate of the platters will reduce latency, and for that reason high-performance HDDs rotate at 15,000 rpm rather than the more standard 7,200 rpm.

Rotating the platters faster than 15,000 would result in further reductions in latency, but for practical reasons this is difficult to achieve: the faster the platters spin the less stable they are. Faster spinning disks also consume far more power. Both of these issues have been addressed in part by filling HDDs with helium , but for the moment 15,000 rpm appears to be the limit.

Reducing seek times to increase HDD performance is possible, and this is commonly achieved using a trick called “short stroking”. This involves using only a portion of an HDD’s capacity, for example by only using the outermost 10% of each platter. By doing this, the read/write head only has to cover a distance one tenth as far as if the whole platter was in use, and on average it will be far closer to where it needs to move to for each read or write operation.

The downside to short stroking is that although there will be a significant increase in hard drive speed, it is extremely inefficient because only a small portion of the HDD storage capacity can be utilized even though the power consumption remains unchanged.

It’s difficult to get an exact “ssd to hdd” speed comparison, because other factors like interface also play a role. But let’s look at two mainstream devices to get a rough comparison.

SSD speed comparisons are complicated by the fact that different devices with different interfaces and storage technologies behave very differently. However, to get an idea of the current state of SSD technology, this is the type of performance available today on a very fast SSD, along with a fast HDD.

Since any SSD vs. HDD speed comparison will show that SSDs offer superior performance, it is not surprising that there is a growing trend towards placing operating systems on SSDs. As well as resulting in a general performance hike, this also results in a system boot speed, which is much quicker than the same system booting an operating system stored on an HDD.

How much quicker? The precise increase in boot speed using an SSD vs an HDD will depend on a variety of factors, but in general it is not unreasonable to expect an improvement of 200% – 800%.

To put that into context, a Windows system with an SDD could be expected to boot up in about 20 seconds, while the same system with an HDD could easily take between 40 seconds and a minute and half to boot up. In part the difference may be accounted for by the fact that an HDD takes time to spin up to its operating speed when powered on, but the difference is mainly accounted for by the much faster read speeds that an SSD can offer during the read-intensive boot process.

SSDs and HDDs are usually supplied with manufacturers’ specifications, but to get the best SSD v HDD speed comparison between two specific devices you need to run an SSD vs. HDD performance benchmark exercise using benchmarking software.

CrystalDiskMark: This is a popular and easy-to-use tool which carries out both SSD and HDD benchmarking.

Atto Disk Benchmark: This is a widely-accepted tool that can benchmark SSDs and HHD, as well as RAID arrays and host connection to attached storage.