“The amount of space that you’re wasting by putting that into an array slot is enormous,” said Lovell.

The DIMM-sized Open Flash Module (see image at bottom) will have an initial capacity of 24GB and support SAS and SATA. The NAND module would still appear as a hard drive to software, but hardware would need to be redesigned for the new slot.

Sun is releasing the electrical specifications for the Open Flash Module “into a number of different open source communities, including Sun.com and potentially OpenSolaris.org,” the company said. The new spec leverages existing JDEC specifications, “and it will also be released to a number of standards bodies,” Sun said. Samsung is building its own module based on the specification.

“We hope it will become an industry-wide standard,” said Lovell.

Sun said that open sourcing the hardware specification “will give the Open Storage community access to an industry standard for further flash innovation.”

“The new form factor makes sense to me; being close to the processor is how you really gain performance,” said Enterprise Strategy Group analyst Mark Peters in an e-mail. “Now who knows which version of solid state storage will ultimately win? Certainly, the SSD implementation has been the quick and easy one so far, and many vendors, Sun included, are tackling the possibilities with multiple offerings. … However, the longer-term potential for solid state is much broader.”

The main reason for external storage and storage hierarchies is economics, said Peters. “In other words — and I realize I’m exaggerating to make the point — if all storage were to be free, then wouldn’t we have everything in the compute platform? As solid state gets relatively less expensive, we can move certain users and applications towards this more simple model. Storage doesn’t have to spin! Yes, of course we’ll look at hybrid models for many years — HDDs won’t disappear for years — but solid state has the potential to (finally!) be a game-changer.”

And such a vision could also fit with Sun’s open storage strategy focusing on the ZFS file system and JBODs.

Greg Schulz, founder and senior analyst at StorageIO, said the new form factor is promising if hardware support could be added cheaply enough and few if any changes to I/O, device driver operating systems or BIOS are required.

Schulz said it could be positioned “as either a persistent-based storage replacing traditional server RAM-based disk or in-memory disk caches, or as a means of eliminating overhead of PCIe and other I/O connectivity. However, the reality is that either the flash is going to be accessed via the normal memory map and thus what are the server, BIOS and operating system changes, or if actually attaching to the internal PCIe bus, then what drivers and other changes are needed versus leveraging what’s becoming more commonly available PCIe adapters that are either SSD/flash ready or capable?”

Schulz also noted that flash has write performance penalties that RAM doesn’t “due to
overhead with how data is written into the cells of flash-based memories. RAM-based SSD is good for I/O read and write intensive applications, where flash-based SSD is better for read intensive I/O applications, particularly if there is no RAM-based cache or buffer combined with the flash to offset write performance
penalties.”

Objective Analysis analyst Jim Handy said PCIe would have been a better choice for an interface. “Fusion-io, Violin, Intel and
others have chosen PCI express so that the speed of the NAND is not
throttled by the SATA bus,” he said. “SATA is fast, and SAS is faster, but both pale
in comparison with PCI.

“In the long run, NAND will not communicate with the CPU over an I/O bus, but
will be mapped into main memory either through its own bus or via the main
DRAM bus in the system,” said Handy. “This ultimate approach will be even faster than
PCI. The industry is sneaking up on this one step at a time, rather than
all at once, which is prudent. Sun’s approach, however, is not at the front
of the pack.”

Sun has already added flash technology to its Sun Storage 7000 Unified Storage line, and the company said it “will soon introduce a family of high-performance, energy-efficient flash-based storage arrays.”

The company said its SSD approach integrates the technology across software, systems and storage, yielding as much as 65-fold increase in response times and eight times better throughput, while saving 38 percent in energy costs over spinning hard disk drives. 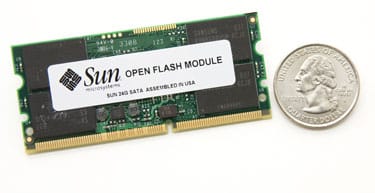 Paul Shread
eSecurity Editor Paul Shread has covered nearly every aspect of enterprise technology in his 20+ years in IT journalism, including an award-winning series on software-defined data centers. He wrote a column on small business technology for Time.com, and covered financial markets for 10 years, from the dot-com boom and bust to the 2007-2009 financial crisis. He holds a market analyst certification.