There is no doubt that the enterprise SSD marketplace is hot right now. But storage users have been subjected to wave after wave of hype for the last couple of decades. Some are wondering if they should trade in all their hard disk drives (HDDs) for solid state drives (SSDs) while others are trying to figure out how to strategically deploy enterprise SSDs to gain maximum bang for their buck.

In such a burgeoning market, it is always good to take stock of the key factors as well as reviewing some hard numbers. Here are the top 10 storage trends in the enterprise SSD marketplace according to leading analyst firms and some of the top players in the industry.

Yes, there is plenty of hype. But the raw numbers for quarterly and annual flash revenues tend to back it up. International Data Corp. (IDC) studies, for example, show enterprise SSD capacity shipments growing at a rate of almost 50 percent per year, with this trend expected to continue until the end of the decade. Extrapolate that over the next five years, and the size of the market will be roughly 7.5 times larger than it is today.

Going back a few years, SSDs were primarily being used in either consumer devices or to add a little boost in performance to a server or storage array. But the market has evolved considerably since that time. IDC research finds that SSDs usage is moving into almost every area of the data center and every area of IT.

“Demand for SSDs in both the client and enterprise market remains strong,” said Jeff Janukowicz, an analyst at IDC.

“SSDs facilitate more efficient and faster access to data,” he said. “This creates a growing opportunity for SSD suppliers to deliver client PC and enterprise data center solutions, and capitalize on the transformation underway in these markets.”

However, HDDs are far from dead. Gartner research data indicates that HDD shipments have levelled off rather than collapsing. Further, Gartner expects HDD revenues to continue to rise by a modest 4 percent per year for the rest of the decade. This may pale in comparison to SSD growth, but it highlights the fact that rumors of the death of the disk drive are a little premature.

In all probability, the SATA HDD market will morph into a lower tier of data storage. Depending on economics and data access rates, HDDs will find a role as the repository for the bulk of data, but over time, SSDs will eat steadily into the percentage of stored data.

All-Flash Array (AFA) vendors are generating a lot of publicity of late. Listen too closely to their pronouncements and you get the impression that everyone is ditching HDDs and relatively few are bothering with Hybrid Flash Arrays (HFAs) made up partly of SSD and partly of HDDs. Yet the hybrid array market is three times larger than the all-flash market in terms of enterprise SSD market share, according to IDC.

“While many are opting for all flash SSDs, the majority still prefer a hybrid approach,” said Greg Schulz, an analyst at StorageIO Group.

But if AFAs can maintain their upward trajectory, they are destined to overtake HFAs within a few years. IDC placed the AFA market at $794.8 million for Q1 2016. That’s a staggering year over year surge of 87.4 percent.

The HFA segment, on the other hand, boasted $2.2 billion in revenue and 26.5 percent market share. But if those growth rates persist, AFAs will take the lead in a couple of years.

EMC leads the enterprise SSD marketplace and the AFA space. Its XtremIO product line alone managed $1 billion in bookings last year, with an installed base that now exceeds 2,800 customers and over 6,000 clusters. In the AFA segment, IDC says EMC XtremIO had about 40 percent market share in 2015. This slipped to a little over 30 percent, however, in Q1 2016. 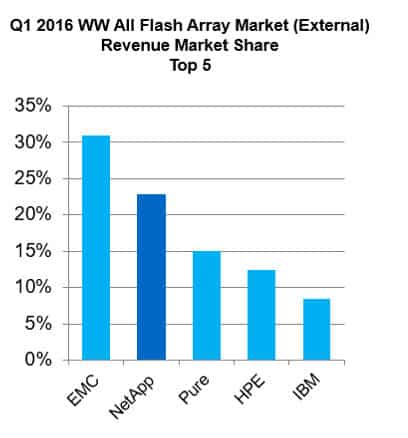 Far from lying down under the blitz of enterprise SSD product development, acquisitions and PR emanating from EMC, NetApp is showing an admirable fighting spirit and is also gobbling up market share.

In AFAs, NetApp used to sit well down the pecking order behind EMC, Pure Storage, HPE and IBM. But it leapfrogged into second place in Q1 with more than 20 percent of the pie.

“Vendors are looking to support larger SSDs within an enterprise storage system, and we estimate that a number of vendors will soon announce 15 TB SSDs,” said Segal. “This will bring the supported size of flash enterprise systems to be on par or even exceed large HDD system from a total capacity, but offer a denser configuration that requires less power and cooling.”

It seems the tide of data center consolidation is unceasing. Wave after wave of technological upheaval has meant packing more and more technology into ever smaller units of real estate. SSDs are very much in the vanguard of this trend.

“When combined with the advanced storage efficiencies on enterprise flash arrays, users can fit the capacity and performance available in multiple racks of hard drives into a single shelf of enterprise SSDs,” said Fore. “This will drive infrastructure consolidation to help relieve pressure and need for data center growth.”