The effects of enterprise storage downturn appear to be rippling into the market for data backup appliances.

IDC’s most recent analysis of the market reveals that purpose-built backup appliance (PBBA) revenues were $737.5 million in the third quarter (Q3) of 2016, a year-over-year drop of 7.9 percent. Mainframe backup vendors were particularly hard hit, with a 17.1 percent decline. PBBA open systems (non-mainframe) providers experienced a 7.2 percent drop to $686.1 million in revenues.

“The PBBA market closed out the third quarter on a downturn, following a similar trend as the enterprise storage systems market,” observed Liz Conner, research manager at IDC’s Storage Systems practice, in a statement. Not all regions contributed to the decline, however. 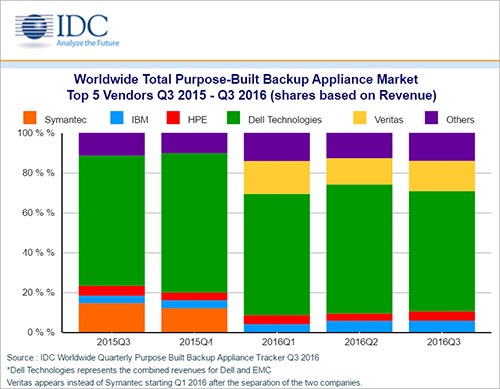 Dell Technologies, as the post-merger technology giant is now called, is the leading PBBA company, with a 60-percent share of the market on $444.9 million in sales, a decline of nearly 15 percent compared to last year.

Second-place Symantec-Veritas – reported as a single entity despite the Veritas spin-off to measure year-over-year performance – saw its revenue drop 4 percent to nearly $112 million for 15.2 percent of the market. In the next quarter, IDC’s Worldwide Quarterly Purpose-Built Backup Appliance Tracker will drop security-focused Symantec from its quarterly results.

Finally, Quantum rounds out the top five with $18.5 million in revenue, a 2.8 percent gain on an annual basis, and 11.6 percent of the market.

Although PBBA sales were down, storage capacity was up. In total, vendors shipped 920 petabytes of backup storage capacity in Q3, a 12.1 percent increase compared to the same period last year.

API management tools aid in the building, publishing and integration of APIs across the cloud. Explore top tools now.