HPE placed first in the modestly resurgent market for enterprise storage systems during the second quarter (Q2) of 2017.

Data storage vendors breathed a little sigh of relief in Q2. During the quarter, enterprise storage system sales notched up 2.9 percent on an annual basis, reversing a persistent market decline, according to the latest research from International Data Corporation (IDC). 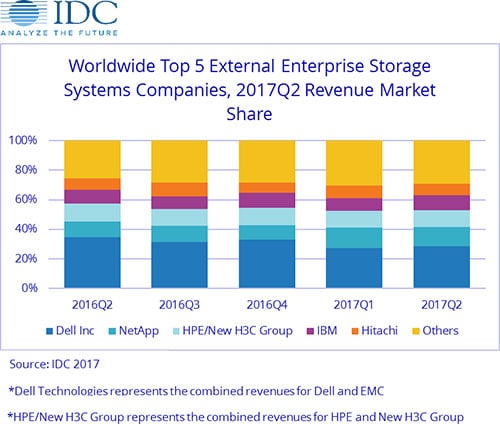 Sales of all flash arrays hit $1.4 billion, a year-over-year gain of 37.6 percent. Hybrid flash arrays generated $2.1 billion in revenue for vendors. Server-based storage revenue dropped 13.4 percent to $2.9 billion, according to the analyst firm.

Demand for traditional external storage arrays continues to slip, but they still represent the largest slice of the pie. Sales in Q2 hit $5.3 billion, a 5.4 percent year-over-year decline.

Combined, HPE and its Chinese joint venture New H3C Group, led the pack with 20.1 percent of the overall market and second-quarter revenue of $2.17 billion, a 13.2 percent annual drop. Dell, now home to EMC’s storage portfolio, was a close second with 18.4 percent of the market on revenues of $1.99 billion, a 26.7 percent decline compared to the same quarter last year.

NetApp, IBM and Hitachi round out the top five. Among these top storage providers, NetApp was the only company to grow revenue and market share. NetApp generated over $694 million in sales, a year-over-year increase of 16.7 percent, and laid claim to 6.4 percent of the market compared to 5.7 percent in Q2 2016.

As a group, original design manufacturers (ODMs) are basking in the intense demand for enterprise cloud services. Their direct sales to hyperscale data centers totaled $2.5 billion in Q2, a whopping year-over-year increase of 73.5 percent.

What Is Cold Data Storage? Storing Cold Data in the Cloud

Object storage, the newest of the three standard kinds of data storage, holds unstructured data in a flat pool rather than in a hierarchy....
Read more
Storage Management