Network Attached Storage (NAS) is one of the easiest data storage networks to implement. The simplest way to think of NAS is as a type of specialized file server. Instead of writing a file to the C drive on a local desktop, it is written to another drive, which means the files are saved directly onto the NAS device (also known as a filer, or NAS filer).

While a file server has a limited supply of storage, NAS storage can provide you with terabytes (TB) of space, instantly accessible to anyone over a standard Ethernet connection. Compared to a general-purpose server serving files, NAS offers faster data access and easier administration. It also offers:

The simplicity associated with NAS storage, however, has changed somewhat in recent years. Modern day enterprise NAS tools now come with a variety of features. This can include dynamic point-in-time snapshots, replication, thin provisioning, deduplication, and compression, as well as faster speeds and greater capacities. 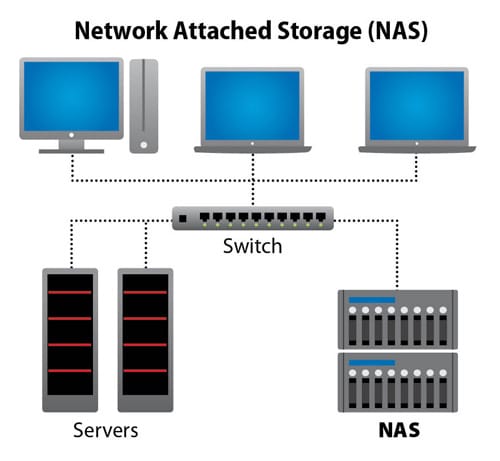 When considering NAS, your business should consider four things.

From a security standpoint, NAS devices either provide file system security capabilities of their own, or allow user databases to be used for authentication purposes. Further NAS benefits include devices being located close to the users thereby reducing network traffic.

Another advantage of NAS is that it offers platform independent access. For instance, as many environments now use more than one operating system, enterprise NAS provides a mechanism that allows users to access data regardless of what operating system is used to authorize them on the network. NAS, though, is not faster than DAS. Many times, the speed of the network impedes data retrieval. Even if NAS is armed with SSDs, it is unlikely to outperform a server using flash.

Starting from a few hundred dollars, NAS is available as free-standing or rack-mounted units that can accommodate storage devices of all types and all capacities. Many NAS devices also incorporate technologies such as RAID and provide UPS capabilities as well. When you need network storage, but you don’t want to get involved with the complexity and expense of a SAN, NAS is the way to go.

RAID (Random Array of Independent Disks), mentioned in the section above, is a storage technology that allows data to be copied from one disk to another in case of disaster or internal damage. Though it’s not ideal as a lone backup solution (storing data in one physical location is dangerous for businesses), it’s still a useful feature for NAS drives.

A NAS device with four bays, for example, could enable RAID and have the same files on two of the drives. If one fails, the data is still on another drive. It doesn’t prevent the entire physical loss of data (if there is an office fire, for instance), but it does provide some additional protection against ordinary hardware failures.

NAS doesn’t work particularly well with databases. And large enterprises or those that need the highest possible network performance should probably stick to a SAN. But the firm line of separation that used to exist between NAS and SAN is changing due to convergence. Many recent NAS offerings support the NAS protocols (NFS, CIFS/SMB) and the SAN protocols (iSCSI, Fibre Channel) from a single piece of hardware.

Direct-attached storage is attached directly to a computer or server. Unlike the other systems, DAS isn’t part of a storage network. In a DAS configuration, storage devices such as solid state drives (SSD) and hard drives are attached directly to the system through accessing them. DAS is called ‘direct’ because the connection between device and the server is typically achieved using a storage device interface, such as Integrated Drive Electronics, Small Computer Systems Interface (SCSI), or SATA. The storage devices are either physically inside the server to which they are attached or in external housing connected by a cable.

DAS drawbacks include resource contention. The server hosting the data may be better employed crunching numbers or providing raw compute power than merely serving up files. There can also be licensing issues. You need far more licenses with a lot of data on DAS than you would hosting them on some kind of network storage.

If enterprises use Non-Volatile Memory Express (NVMe) SSDs to connect to their server’s PCIe bus and therefore the CPU, it significantly accelerates DAS performance. NVMe drives use flash to access stored data. Many companies use data all-flash arrays for part of their storage. In some cases, NVMe can be used over Fibre Channel or Ethernet to create a network: NVMe Over Fabrics combines the advantages of DAS and SAN, though it’s in its infancy and hasn’t worked out all its kinks yet.

SAN is a form of network storage in which multiple devices are connected to each other and to a server or cluster of servers. They utilize special switches between devices, which makes it possible for them to communicate with each other on a network separate from routine Ethernet. This isolation from other networks makes back-up much simpler and faster – the backup is not computing for bandwidth with other applications.

SANs make use of either Fibre Channel or iSCSI technology (iSCSI allows data to be transported to and from storage devices over an IP network). The SAN provides the highest-performance type of storage network. However, if a SAN sprawls too widely, the enterprise may need to develop multiple SAN fabrics. SANs are more complex than NAS and DAS. They are also more expensive. In the article NAS vs. SAN, we discuss the fundamental differences and use cases between the two technologies.

SANs are separate networks dedicated to storage devices, while a NAS device is a storage subsystem that is connected to the network media. NAS, then, takes a more streamlined and dedicated approach to making data available to clients in a heterogeneous network. Its hardware components, software, and firmware are tightly integrated and far more reliable than DAS. NAS devices operate independently of network servers and communicate directly with the client.

In the event of a network server failure, clients will still be able to access files stored on a NAS storage device. NAS maintains its own file system and accommodates network protocols such as TCP/IP and IPX/SPX. NAS also uses file access protocols such as SMB, CIFS, NCP, HTTP and NFS.

NAS has evolved tremendously since its early beginnings. Massively scalable, high performance file storage systems are now available to support intensive processing from a variety of applications. NAS has many examples and use cases:

The open source community has adopted NAS in many diverse ways. Examples include:

Red Hat Gluster, for example, can be employed to help enterprises build distributed NAS services either on bare metal, in virtualized and containerized environments, or in the public cloud. Storage clusters can synchronize across distances and prepare standard SMB and NFS interfaces for large numbers of simultaneous clients. This approach works well for rich media, archival, analytics, and generic file sharing workloads.

Overall, NAS usage is expanding in markets and environments that require raw storage capacity and scalability, such as video surveillance, active archives, media asset management, video streaming, and post-production. Their workloads require a reliable and easy-to-manage NAS environment that can scale to their needs and support long-retention demands.

Overall, three markets appear to be emerging as bastions of NAS usage in the enterprise:

The Future of NAS

What lies in the future for NAS? NAS is likely to continue in its role as a complement to block storage, where performance is not a big factor and ease of access is the major criteria. By utilizing the latest multi-core servers and flash, large-scale NAS deployments can offer even greater performance than ever.

As high-speed, scalable storage access has become a priority for enterprises, some in the data storage industry have questioned whether network-attached storage is still a valid method of enterprise storage. Not everyone believes it’s still a good storage system. NAS is restricted to file storage, and many large businesses now find themselves needing the capacity of object storage.

Regardless of industry concerns, NAS devices still have a market for small and medium enterprises and entrepreneurs. Their selling points are file backup and lower long-term storage costs.