IDC reports that the worldwide market for enterprise storage systems dropped 6.7 percent on year-over-year basis in the fourth quarter (Q4) of 2016 before settling at $11.1 billion. While sales may have dropped, the market’s appetite for more capacity remains unsated. Vendors shipped 52.4 exabytes worth of storage capacity in Q4, an annual increase of 18.3 percent.

The drop in storage sales can be largely attributed to a decline in demand for traditional disk-based systems, the industry’s bread and butter. Meanwhile, sales of all-flash arrays jumped 61.2 percent, hitting the $1.7 billion mark. 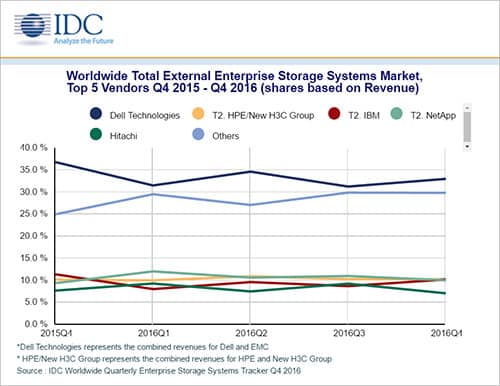 In Europe, the Middle East and Asia (EMEA), the phenomenon is even more pronounced.

Sales of external storage system fell by 10.6 percent in the region, led by a whopping 37.9 percent drop in demand for hard disk drive (HDD systems). Demand for hybrid arrays, which contain a blend of HDDs and flash storage, dipped 4.7 percent, year over year.

By comparison, all-flash arrays sold briskly, earning storage vendors 53.6 percent more in revenues than the same quarter a year prior.

“The EMEA external storage market still seems trapped in a revenue decline, dragged down by legacy, HDD-only systems,” said IDC research manager Silvia Cosso in a statement. “However, the seeds of the next-generation datacenter are more clearly emerging: the all-flash array segment increased to a quarter of the total external market value in the fourth quarter of 2016 and a fifth for the whole year, and hyperconverged appliances, although still a fraction of total sales, are also growing fast.”

Unsurprisingly, Dell Technologies took the top spot in the global Q4 2016 vendor rankings, selling $2.1 billion worth of storage systems and claiming nearly a third of the overall market. The company replaces EMC after having acquired the data storage giant last year.

HPE and its Chinese joint venture with H3C Technologies tied for second with IBM and NetApp, each with more $640 million in revenue and around 10 percent of the market. Hitachi brings up the rear with over $451 million in sales and a seven percent share of the market.