Storage vendors sold $9.2 billion worth of equipment in the first quarter (Q1) of 2017, a slight 0.5-percent decline, reported IDC. In total, the storage industry pumped out 50.1 exabytes of capacity during the quarter, a year-on-year increase of 41 percent.

Again, the traditional disk-based array segment continues to erode as organizations devote more of their IT budgets to faster flash systems. 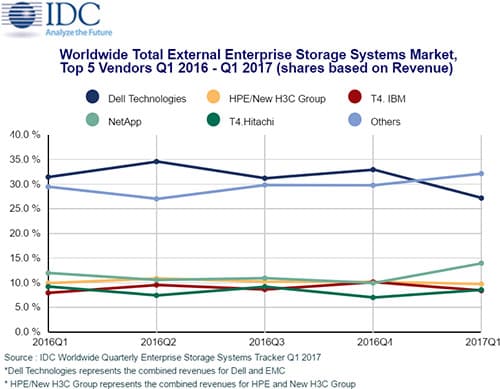 Dell remains the external enterprise storage systems leader with sales of $1.4 billion in Q1, representing a 16 percent dip compared to the same year-ago quarter, and 27 percent of the market. But those figures don’t tell the whole story, claimed the IT titan.

“Dell EMC continues to enjoy its worldwide leadership position in the storage systems market, which is almost 2x our closest competitor,” a Dell EMC spokesperson told Enterprise Storage Forum in email remarks. “In light of Dell EMC’s move to a new fiscal reporting calendar that has skewed IDC’s reported numbers for our storage business, coupled with IDC’s reported 2.8-percent decrease in the overall market for Q1, the dip in Dell EMC’s calendar Q1’17 market share was anticipated. We expect IDC’s numbers will normalize in future quarterly market share reports.”

NetApp took second place with sales of $731 million, a 13-percent improvement, and a 14-percent share of the market. Hewlett Packard Enterprise (HPE) and its New H3C Group joint venture in China came in third with $511 million in enterprise storage systems revenue and nearly 10 percent of the market. Hitachi and IBM tied for fourth place.

In terms of the overall enterprise storage systems market, including external arrays, Dell’s lead over HPE/New H3C Group is a narrow one, with $1.97 billion and $1.86 billion in revenue, respectively, and a little over one percentage point separating them. NetApp took third place with $731 million while Hitachi and IBM again tied for fourth place with sales totalling more than $455 million apiece.