What Is NAND Flash Memory? NAND vs NOR

NAND is the most popular type of flash storage memory for USB flash drives, memory cards, and SSDs. It is used in some of the best SSDs in the market today.

This flash memory technology is non-volatile chip-based storage, and unlike DRAM does not require a persistent power source. NAND cell arrays store 1, 2, 3, or 4 bits of data. When the NAND SSD or card is detached from a power source, metal-oxide semiconductors called floating-gate transistors (FGT) provide electrical charges to the memory cells, and data remains intact.

It stores data in memory cell arrays that are defined by transistors. Each transistor has two gates instead of one, like an electrical switch where the current flows between two points. A floating gate and a control gate control the energy flow in a flash memory cell. The control gate captures electrons and moves them as needed into the floating gate.

NAND flash development concentrates on reducing the size of the chips while maintaining or increasing their capacity. This reduces bit costs and increases density, so NAND SSDs can successfully compete with HDD’s. Another feature is connecting cells in series of FTGs, which takes less takes less space than parallel connections and further reduces NAND flash costs.

The most common types of NAND are between cells containing 1, 2, or 3 bits a cell. We call these SLC, MLC, and TLC. 3D NAND is also gaining ground and high-performance, high density environments.

NOR and NAND are the two types of flash memory. Both NOR and NAND flash memory are embedded in small electronics like cameras and smartphones, but only NAND is cost-effective and dense enough to serve in flash-based enterprise storage environments.

Neither is a new technology. Toshiba developed NOR and NAND flash memory in the early 1980s, and named them after their respective logic gates. (Truth tables display each logic gate’s function.) NOR is named after NOT-OR, and NAND after NOT-AND. Both types of flash memory store data in memory cells that are created from floating gate transistors (FTG).

NAND is capable of higher performance than NOR flash.

The NAND marketplace is experiencing a challenging cycle of supply and demand. This is not new for this market: NAND flash pricing tends to raise and lower in 2-year cycles.

In 2016 and 2017 (see below), the NAND market experienced a flash chip shortage. The two main factors were rising demand for NAND flash products, and the development of 3D NAND, which uses more chips per device.

SSD prices did not significantly rise. This was likely because manufacturers were only too aware that growing NAND sales were directly related to lowering the price gap between SSDs and hard drives. Accordingly, manufacturers and resellers did not raise prices by a great deal, despite the shortage. Most prices stayed flat or only rose about 6% a quarter.

Prices began stabilizing in 2018 as supplies loosened up. However, by the 4th quarter of 2018, NAND prices dropped steeply thanks to higher manufacturing rates, increased demand for 3D NAND over 2D NAND, and lower sales of new iPhones. In Q1 2019, analysts are generally forecasting a 10% drop in price.

3D NAND is the game changer, since it encompasses SLC, TLC, MLC, and QLC. The deployed base of existing NAND flash is not going anywhere soon, but we are seeing demand steadily rise for 64-layer 3D NAND. If you are undergoing a technology refresh, or simply adding more NAND flash into your data center, look to NAND and 3D NAND for fast processing and growing capacity in a small flash footprint. 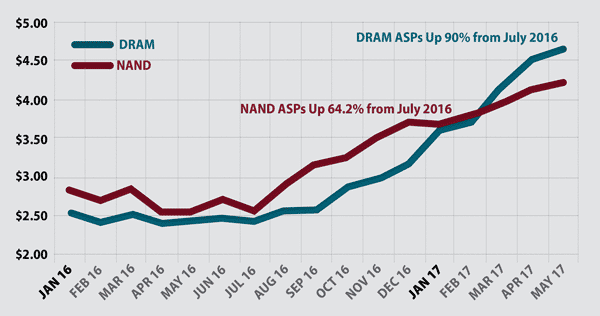