Hyperscale data center operators are increasingly turning to original design manufacturers (ODMs) for their data storage needs, according to the latest market data from IDC.

In total, the market for enterprise storage systems jumped 14 percent in the third quarter (Q3) of 2017 on an annual basis, reaching $11.8 billion. Collectively, ODMs that sell to hyperscale data center customers saw their sales skyrocket to nearly $2.7 billion, a 54.8 percent year-over-year increase. 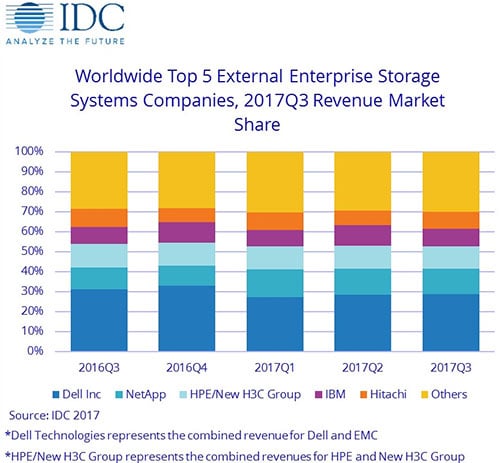 All-flash arrays continued their invasion of the data center in Q3. This segment of the market generated nearly $1.6 billion in sales, a year-over-year of gain of 38.1 percent. Meanwhile sales of hybrid flash arrays hit $2.3 billion in Q3.

“The enterprise storage market finished the third quarter of 2017 on a positive note, posting strong year-over-year growth and the first double-digit growth in several years,” said IDC research manager Liz Conner in a statement. “All Flash, software-defined, and converged/hyperconverged systems continue to be the driving force for traditional storage vendors. Meanwhile, hyperscalers once again saw event-driven storage requirements lead to strong growth in this segment during the third quarter.”

HPE ranked third, with $637.6 in revenue and a 11.4-percent share of the market. Again, IBM and Hitachi tied for fourth place, each with over eight percent of the market and north of $460 million in sales for Q3.

What Is Cold Data Storage? Storing Cold Data in the Cloud

Object storage, the newest of the three standard kinds of data storage, holds unstructured data in a flat pool rather than in a hierarchy....
Read more
Storage Management

Storage Area Networks (SANs) may no longer have the luster they once enjoyed in the marketplace. Cloud storage, virtualization, and object storage tend to...
Storage Hardware