Network attached storage (NAS) devices are among the most inexpensive and easiest-to-manage of any storage hardware. That has made NAS storage very popular with home users and small businesses, but NAS is also surprisingly popular with enterprises.

In the past, enterprises have often used NAS devices for remote or branch office locations. NAS devices’ easy manageability make them a good fit for environments with few (if any) IT staff on site and where fast performance isn’t a key requirement.

Today, however, the advent of affordable flash and scale-out storage means that NAS performance often rivals that of more expensive SAN hardware. A lot of modern NAS storage also has features like deduplication, snapshots, compression, encryption and compression that make them suitable for more enterprise use cases, including big data analytics and machine learning.

Because every enterprise will have slightly different needs, it’s nearly impossible to select one — or even a dozen — best NAS. However, the eight enterprise NAS devices below offer a snapshot of some of the best NAS storage currently on the market. All are rack-mounted hardware, but they span a wide range of form factors, performance characteristics and price points. They are arranged in alphabetical order and the table at the end compares some of their key traits.

To further assist your buying research, see our Guide to Choosing the Best Enterprise NAS.

Dell EMC boasts that its Isilon storage is “the industry’s #1 scale-out NAS platform.” The F800 is its all-flash option, which provides up to 250,000 IOPS and 15 GB/s bandwidth. The company also claims that its dense system design reduces space requirements by up to 75 percent. It’s designed for high-performance workloads like HD video and data analytics.

See our in-depth coverage of the Dell EMC Isilon F800

The NX430 is Dell’s entry-level appliance in its NX Storage family. Designed for use with Windows Storage Server 2016, it comes with the operating system pre-installed for easy deployment. It’s built on Dell’s PowerEdge server platform featuring Intel Xeon processors.

See our in-depth coverage of the Dell Storage NX430

Pure Storage FlashBlade is a scale-out NAS solution that offers both file and object storage. Thanks to its innovative blade design, FlashBlade condenses the storage provided by 50 racks of legacy storage into just 4U of space, according to the company. It also uses a proprietary messaging protocol to deliver up to 320Gb/s bandwidth per chassis. 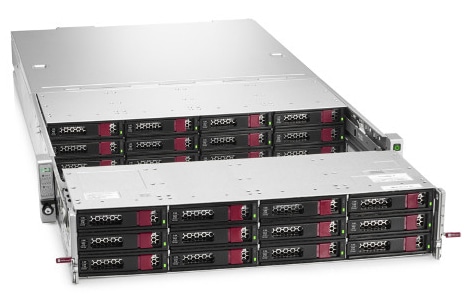 According to HPE, its StoreEasy 1660 offers 60 percent more internal capacity than its previous best-selling NAS. The 1000 series of products also boasts up to twice the performance and 50 percent lower latency than previous generation hardware. The devices are based on HPE ProLiant Gen10 servers and come pre-configured with Microsoft Windows Storage Server 2016.

See our in-depth coverage of the HPE StoreEasy 1000

NetGear boasts that its ReadyNAS 2312 is the “industry’s first 1U 12-bay high-density network storage solution.” It promises high-performance with a quad gigabit Ethernet interface, plus five levels of data protection and automated backup and disaster recovery. It can be used by small enterprises or SMBs, and it includes RAID protection for high availability.

See our in-depth coverage of the NetGear ReadyNas 2312 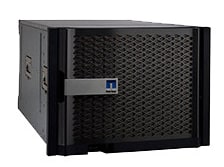 The NetApp FAS9000 can be configured either as a SAN or NAS and offers blazing fast performance with NVMe flash. It can scale up to 24 nodes and features continuous availability, built-in encryption and simplified management with NetApp ONTAP data management software. According to the company, it’s up to 50 percent faster than previous-generation hardware.

See our in-depth coverage of the QNAP ZFS NAS Series

Qumulo’s QF2is a scale-out file storage system that can run on premises or in the cloud. When QF2 runs on the company’s P-Series all-flash storage hardware, it creates a high-performance NAS device suitable for advanced applications like machine learning, gene sequencing, HD video editing and more. It comes in two versions: the P-23T with 23TB of raw capacity or the P-92 T with 92 TB of raw capacity.

See our in-depth coverage of the Qumulo QF2 P-Series

Data fabric has become one of the most commonly used, and perhaps most-hyped, technology architectures of the last few years. In fact, after Gartner...
Storage Management

Amid all of the current disruption and global happenings, some technical projects and trends quietly continued in the way they were expected to. One...
Storage Management

Storage-as-a-Service (STaaS) has only been with us for a little more than a decade, but it is hard to find someone who isn’t using...