NAND Flash Prices are Leveling Off

Surging demand for smartphones and solid-state drives (SSD) in the data center has kept supplies of NAND flash chips tight and prices relatively high in 2017. Although consumers are still expected to keep snapping up the latest and greatest iPhones and businesses will continue to invest in flash-based storage systems, prices are stabilizing.

A new report from DRAMeXchange, a division of market research firm TrendForce, shows that despite a significant “gap between supply and demand” during the third quarter (Q3) of 2017, the worlds’ NAND flash suppliers have kept prices in check. Contract prices during the period were either flat or were raised by a modest six percent on a quarterly basis, according to TrendForce analyst Alan Chen. 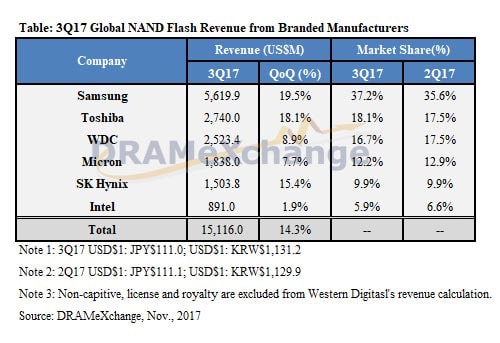 Samsung is the leading supplier of NAND flash chips, capturing nearly 37.2 percent of the market and generating $5.6 billion in sales in Q4, a 19.5 percent quarterly increase. The South Korean electronics giant began mass producing it 64-layer 3D NAND flash during the quarter, much of landing in mobile devices and SSDs. By the end of the year, Samsung is expected to achieve an even split between 3D and non-3D NAND production.

Toshiba takes second place, with nearly half of Samsung’s market share (18.1 percent) and $2.7 billion in revenue. Western Digital, Micron and SK Hynix round out the top five.

Sixth-pace Intel, with revenue of $891 million and 5.9 percent of the market, is poised to make gains. As long as enterprises keep turning to the chipmaker’s storage technologies, that is.

“In terms of SSD for enterprises, [the] PCIe interface is now becoming the mainstream as customers switch to [the] Purley platform. Intel took the lead to introduce 64-layer 3D-NAND to enterprise SSDs, and continued to secure its future revenue growth by signing long-term contracts with customers,” stated DRAMeXchange.

Intel is laser-focused on the SSD side of the market, with 90 percent of its development efforts being devoted to the product class. Meanwhile, 3D XPoint adoption remains low, due to the technology’s high price (relative to SSDs) and small customer base.