What is SSD cache? SSD caching is a computing and storage technology that stores frequently used and recent data to a fast SSD cache. This solves HDD-related I/O problems by increasing IOPS performance and reducing latency, significantly shortening load times and execution. Caching works on both reads and writes, and particularly benefits read-intensive applications.

Caching is not new to hard drives. Operating systems like Windows and Linux come with native caching software. HDD array caching software exists and increases overall HDD performance, but the configuration is expensive and complex.

How Does Caching Work?

SSD caching is also called flash memory caching. Although flash and SSD are not the same thing, most SSDs are NAND flash. In this architecture, the caching program directs data that does not meet caching requirements to HDD’s, and temporarily stores high I/O data to the NAND flash memory chips.

This temporary storage, or cache, accelerates read and write requests by keeping a copy of the data closer to the processor. Caches may consist of an entire SSD or a fraction of the memory cells within an SSD. Many SSDs already come with a caching storage area, which may be NAND and/or DRAM. 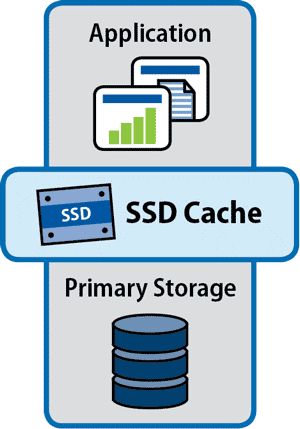 SSD caching may occur in any type of device that uses SSDs:

This architecture does not justify the high cost of an all-flash array. But within an HDD or hybrid array that underlies a virtualized network, SSD caching enables the hard drives to support high I/O requirements even for intensive virtualized workloads.

Server-based SSDs, as opposed to networked array-based storage, also work in virtualized networks. In these cases, the host server uses SSD caches in its direct-attached storage to serve multiple VMs. Because the SSD cache is physically close to the I/O location, latency reduces even more. The drawback is that the server fails, the cached data may be inaccessible and perhaps even unrecoverable depending on the type of write cache. However, if IT backs up/snapshots/replicates the cached data and rapidly restores to another server, this is not a huge drawback.

“Best” is complex concept in SSD caching, because there are many technologies that deliver caching software commands. These include VMWare and Hyper-V, specific applications, third-party software, Windows and Linux, SSD storage controllers, and storage arrays. For example: