SSDs, Flash and Why Disks Will Not Go Away

Almost three years ago, I made the seemingly bold statement that SSDs would not replace spinning disks, and the flash vendors of that time told me I was wrong. Three years later, we still have spinning disks. And though the market units are steady to slightly down, the number of exabytes shipped is steadily increasing.

Flash vendors continue to repeat their mantra that spinning disk is dead. Yet the amount of storage necessary to meet enterprise storage requirements cannot be made by the current or even planned flash fabrication facilities. Add to this the fact that most flash storage vendors are either losing money or barely profitable.

I, for one, am tired of the hype. I figured I would use all my diplomatic skills to bury these inane ideas once and for all.

In this article, I am only going to talk about external SSDs, as PCIe SSDs do not allow data sharing and combined access. Though they have higher performance I/O and and are great for specialized applications, I do not think they provide a general-purpose market solution. Organizations want to share large amounts of data, and PCIe SSDs are not designed to allow that to happen.

Before I begin my rant, let me say that I have been using SSDs for almost 30 years for high performance, I/O, file system caching, file system metadata and high-performance interactive systems. I am in no way, shape or form anti-SSD. I have a pretty good understanding of what SSDs are good for, what they are not good for and where the market is going.

I see are four reasons why SSDs are not going to take over the world:

The most recent statistics I have seen say that 13 percent of the NAND market is SSDs. Adding PCs and tablets gets to you up to 25 percent of the market. 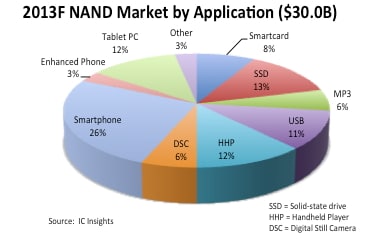 Guess what? That is just not going to happen. The risks are far too high for the companies making the investments. The pricing model for NAND does not work on a per GB basis compared to hard drives, and this is not going to change no matter what the industry pundits said back in 2007 and 2008.

Almost every SSD, from the highest-priced enterprise offering to the lowest-priced consumer product has a performance profile that performs slower writes than reads. For some enterprise SSDs, the difference are small for streaming I/O, but they still can support fewer write IOPS than read IOPs.

The specs for a Seagate enterprise SSD look a bit different, as the streaming read and write performance are the same.

There are lots of streaming I/O problems, for example video capture and playback. Big data capture for analytics is also often streaming I/O. SSDs are not cost effective for these types of problems. Every problem is not an IOPS problem.

The three disk drive vendors have decades of data on the reliability of disk drives and methods to test disk drives to ensure that they are reliable. The companies know how to test things and have process and procedures to make sure products are right before they are shipped. Yes, there have been some mistakes over the years, but I have not heard of anything big in about a decade.

There is a great deal more known about the failure conditions for disk drives and what each error condition means than there is for flash. We have moved in a short period of time from SLC, to MLC to TCL, while at the same time going from 45 nm to 32 nm to 22 nm and soon even smaller. This is far different than disk drives, where for the most part, the same technology has been used for many years. The only major change over the last few years was the disk heads. Of course, with shingled disks and bit-patterned media and heat-assisted magnetic recording, this will change. But at least for now, disks have a significant historical advantage for reliability given the longevity of the technology.

How many times have we seen new consumer technology have problems? The problem with flash is that the the majority of the flash market is focused on the broad market, not just the narrow flash SSD market. We all know the market drivers are where the money flows and goes.

There are far too many SSD vendors given the market size and the cost of sales, marketing and, of course, engineering and development. I have said for a long time the market must consolidate.

For the last 20 years or so, the way users get storage is from the controller vendors, and at least for the foreseeable future, that is not going to change. Yes, I admit that for some applications like Hadoop, storage comes with the servers. And I also agree that people are now building their own storage systems with software RAID, RAID cards and the like. Still, the majority of storage for the enterprise still comes via the traditional storage vendors.

These storage vendors do not want lots of SSD vendors in the space. Working with too many vendors makes things too complex because each of the storage vendors has a prolonged and complex qualification period.

A storage device must meet reliability and performance requirements, and the device’s failure characteristics must be completely and thoroughly understood. That means that all of the error counters must be validated and failure conditions understood so that the vendors can proactively fail the devices to ensure the integrity of the data in the LUN. All of the Self-Monitoring, Analysis and Reporting Technology (SMART) data must be understood. Since some of the newer SSDs vendors have a limited reporting history and a limited understanding of what is important to report, I suggest there is a great deal to learn.

Even the older SSD vendors are using new technology, which might take a significant time and testing to understand.

Last But Not Least

Abraham Maslow once said, “I suppose it is tempting, if the only tool you have is a hammer, to treat everything as if it were a nail.” And unfortunately many of the newcomers to the storage market seem to see all problems one way.

This is not to say that I believe all of the vendors think this way. There is some really good development work going on using PCIe SSDs as a memory extensions.

NAND SSDs have a place in the storage hierarchy, but they are not going to replace spinning disk. Some disruptive technology might suddenly appear and cause a change in the market, but it is not going to be NAND for the reasons outline above.

I think the NAND SSD market is going to continue to see consolidation with vendors buying other vendors and some just disappearing from the market. It happened in the disk drive market in the 1980s and early 1990s, and now it is happening in the SSD market.

That is not say that they are not a good technology and a useful technology. Enterprise storage is still and I think will be under the control of the controller vendors for the foreseeable future.