Vexata emerged from a four-year stint in “semi-stealth mode” on Sept. 20, making its formal debut after completing a $54 million round of funding. Mayfield, Intel Capital, Lightspeed Ventures and Redline Capital invested in the San Jose, Calif. data storage startup.

Vexata also used the occasion to reveal Active Data Fabric, a storage software platform based on the company’s VX-OS storage operating system that uses storage hardware packed with solid-state drives (SSDs) to eliminate input-output bottlenecks that can slow down applications.

The company claims the technology enables blistering performance across a variety of intensive workloads, ranging from enterprise databases and big data to cognitive computing, without requiring that customers to rearchitect their IT infrastructures or rewrite applications. It also supports newer types of solid-state storage, including NVMe (non-volatile memory express) and 3D XPoint from Intel (Optane SSDs) and Micron. 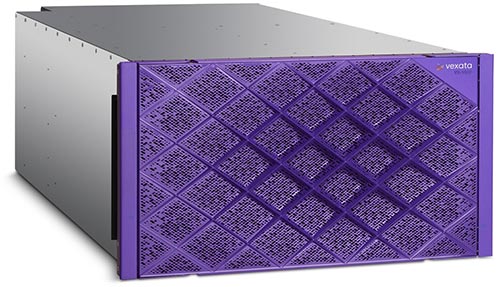 At least one Wall Street firm that runs machine learning and predictive analytics on big data is evaluating the company’s technology, said Vexata CEO and cofounder Zahid Hussain, in a blog post. The customer hasn’t been able to get the system to buckle under the pressures of its intensive workloads yet, he claimed.

That experience may bode well for the company’s cloud storage ambitions.

“The next step is to take our core IP [intellectual property], VX-OS software to the next level by offering this as a software-defined infrastructure while running it on standard servers and switches,” stated the Vexata executive. “This is often a preferable consumption model for hyperscale and cloud datacenters that don’t like having any custom hardware in their environments. We’ll offer this in addition to our currently shipping VX-100 appliance, which is dense, efficient and turnkey.”

Attendees of the upcoming Oracle OpenWorld conference in San Francisco (Oct. 1-4) will be able to see demonstrations of Vexata’s products for themselves. The company plans to show off how its technology handles NVMe over Ethernet, HTAP (hybrid transactional/analytical processing) workloads and Oracle OLAP Flash Cache with Optane.

Storage-as-a-Service (STaaS) has only been with us for a little more than a decade, but it is hard to find someone who isn’t using...
Storage Management

Data recovery software locates deleted or lost data on a disk or other type of storage drive. When a user permanently deletes a file,...