Given the fake news I’ve seen on social media day after day, week after week, it’s depressing. So, I’ve been thinking about blockchain. This technology could do a lot to help prevent fake news. And in my opinion, it would behoove the media, social media and cell phone manufacturers to take immediate action, because this fake news is not good for our society.

For those of you who do not know, a blockchain is a cryptographic continuous list of linked records, called blocks. Each block generally contains a hash pointer which links to the previous block. It also has a timestamp and, critically important for this discussion, transaction data such as dates, times and geographic coordinates.

I think the key feature of blockchain is that when the blockchain is recorded, the data in any block cannot be altered retroactively without the alteration of all subsequent blocks, which needs the agreement of the peer network. By design, then, blockchains are inherently resistant to modification of the data. Thus, a blockchain can serve as “an open, distributed ledger that can record transactions between two parties efficiently and in a verifiable and permanent way.”

How Blockchain Could Prevent Fake News
Could People Get Around Blockchain Requirements?
Could This Really Work?
Ending Fake News

How Blockchain Could Prevent Fake News

What if every audio or video app on your phone, TV news camera or your video camera automatically came set up to create blockchains that included information such as geolocation, date and time? Editing programs would also be required to use blockchain. And what if every frame that was edited had a blockchain describing what changes were made?

Of course, there would need to be agreement on the ledger specifications, but I think this is an easy standard to come to agreement on. There could even be vendor-specific editorial changes that could be in the ledger.

As a result, instead of just the standard jpg header or video format header, you would also have information about such things as where the images were created and if they were edited or spliced together. Anyone could look up this information, and social media monitors could determine if the images were real or edited and if the editing really impacted what was trying to be conveyed.

For example, it is one thing to color-correct to give lighting a bit of a boost, but it is another thing to remove or add someone to an image. Removing someone from a picture has been going on for decades. Take this well-known example from Soviet archives where Nikolai Yevhov is removed from pictures with Stalin: 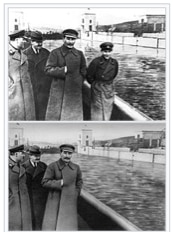 People can be added to an image just as easily. Take another example that drove my family insane with anger. Twenty years ago, I circulated this picture of my grandmother on a ride at the state fair: 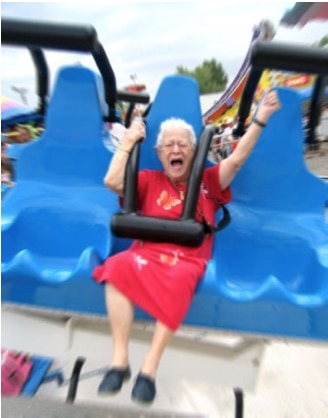 My mom kept asking if my grandmother was really on the ride. When I said yes, she hung up on me. Weeks later, I told my mom that she had asked the wrong question. She should have asked, “Was the ride really moving?” She hung up on me again.

If my wife could do this to a picture 20 years ago with zero Photoshop training, think what can be done today to pictures, videos, audio or any multi-media with a bit of training.

How can you tell what is real or fake?

Could People Get Around Blockchain Requirements?

In our future scenario, could people edit photos without also editing the blockchain? It might be possible if they did the editing offline, but once the image was online again, the blockchain would need to be updated.

But remember, security is an arms race, and nothing works for ever. This method could work pretty well to stamp out fake news for a while, but it is not without some issues. However, as with every security tool, something is better than nothing. My life philosophy is to make a decision with the best information you have and be prepared to modify that decision based on new information and/or changes around you.

Nothing is static, and the rate of change is increasing. If you do not start, you will never have anything. Nothing will ever be perfect for any length of time — if it ever was to begin with (excluding current spouses, of course).

Could This Really Work?

Some people have called this idea crazy, but I am not insane to the best of my knowledge. I am really thinking about this problem and its impact to our world.

Am I asking that every multimedia file on every cell phone or camera everywhere in the world use blockchain to validate the authenticity? Yes.

Given the declining cost of CPUs and their ever-increasing power, I believe this would be possible for future generations of technology. It would require some standards changes in image and audio formats, but this is all possible. Today, with the available technology, it is a simple matter of programming.

The tools available only to Industrial Light and Magic 25 years ago are available to everyone at any time for limited cost. Determining what is real and what is not is difficult at best. Combine that with the facts that local personal reporting is encouraged by social media and mainstream media and that some people want their 15 minutes of fame, you have a recipe that encourages the proliferation of modified multimedia.

Ending Fake News Is Up to Us

Every generation has an opportunity to make the world a better place. In my lifetime so far, technology and computing have been at the forefront. We have safer cars, air travel, new medications, buildings, a better understanding of physics, chemistry and medicine — much of which resulted from hardware and software developed between the start of my life in 1959 and now.

We are now at a crossroads. The truth matters. And in the immortal words of the $6 Million Man intro, “We have the technology.”

We better use that technology — and use it quickly — or we will be overcome with falsehoods and mistruths.