What Is Virtual Memory? How Does It Work?

Virtual memory is an area of a computer system’s secondary memory storage space (such as a hard disk or solid state drive) which acts as if it were a part of the system’s RAM or primary memory.

To get around this problem, some data stored in RAM that is not actively being used can be temporarily moved to virtual memory (which is physically located on a hard drive or other storage device). This frees up space in RAM, which can then be used to accommodate data which the system needs to access imminently.

Virtual memory enables a system to run larger applications or run more applications at the same time without running out of RAM.  Specifically, the system can operate as if its total RAM resources were equal to the amount of physical RAM, plus the amount of virtual RAM.

Why is There a Need for Virtual Memory?

Virtual memory was developed when physical RAM was very expensive, and RAM is still more expensive per Gigabyte than storage media such as hard disks and solid state drives. For that reason it is much less costly to use a combination of physical RAM and virtual memory than to equip a computer system with more RAM.

Since using virtual memory (or increasing virtual memory) has no extra financial cost (because it uses existing storage space) it offers a way for a computer to use more memory than is physically available on the system.

Another key driver for the use of virtual memory is that all computer systems have a limit (dictated by hardware and software) on the amount of physical RAM that can be installed. Using virtual memory allows the system to continue to operate beyond those physical RAM limits.

Since RAM is more expensive than virtual memory, it would seem – all things being equal – that computers should be equipped with as little RAM and as much virtual memory as possible.

How Does Virtual Memory Work?

When an application (including the operating system) is running, it stores the location of program threads and other data at a virtual address, while the data is actually stored at a physical address in RAM. If later that RAM space is needed more urgently by another process, then the data may be swapped out of RAM and into virtual memory.

The responsibility for keeping track of all this data as it is swapped between physical and virtual memory falls to the computer’s memory manager. The memory manager maintains a table which maps virtual addresses used by the operating system and applications to the physical addresses that data is actually stored in. When data is swapped between RAM and virtual memory, the table is updated so that a given virtual address always points to the correct physical location.

A computer can only run threads and manipulate data that is stored in RAM rather than virtual memory. And it takes a non-negligible amount of time to swap data that is needed into RAM. Consequently, it follows that using virtual memory involves a performance hit.

One potential problem with virtual memory is that if the amount of RAM present is too small compared to the amount of virtual memory then a system can end up spending a large proportion of its CPU resources swapping data back and forth. Meanwhile, performance of useful work grinds to a near halt – a process known as thrashing.

To prevent thrashing it is usually necessary to reduce the number of applications being run simultaneously, or simply to increase the amount of RAM in the system.

Operating systems, such as most versions of Windows, generally recommend that users do not increase virtual memory beyond 1.5 times the amount of physical RAM present. So a system with 4 GB RAM should have virtual memory of no more than 6 GB. 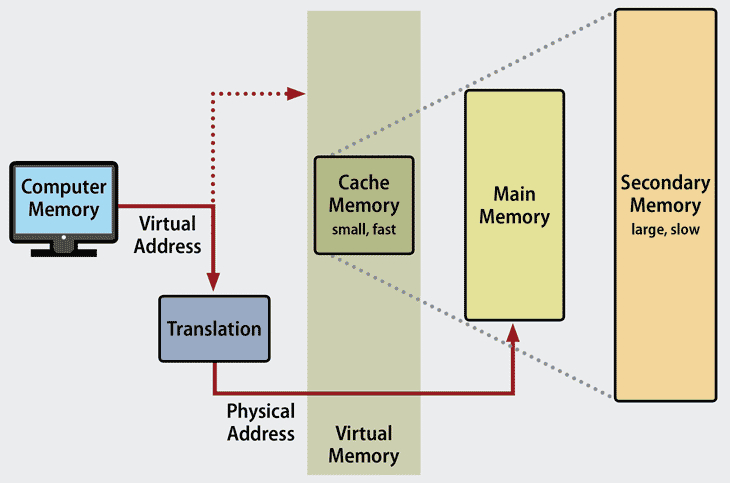 How to Increase Virtual Memory in a System

Most operating systems allow users to increase virtual memory from a configuration page.

Virtual memory can be managed in a number of different ways by a system’s operating system, and the two most common approaches are paging and segmentation.

In a system which uses paging, RAM is divided into a number of blocks – usually 4k in size – called pages. Processes are then allocated just enough pages to meet their memory requirements. That means that there will always be a small amount of memory wasted, except in the unusual case where a process requires exactly  a whole number of pages.

During the normal course of operations, pages (i.e. memory blocks of 4K in size) are swapped between RAM and a page file, which represents the virtual memory.

Segmentation is an alternative approach to memory management, where instead of pages of a fixed size, processes are allocated segments of differing length to exactly meet their requirements. That means that unlike in a paged system, no memory is wasted in a segment.

Segmentation also allows applications to be split up into logically independent address spaces, which can make them easier to share, and more secure.

But a problem with segmentation is that because each segment is a different length, it can lead to memory “fragmentation.” This means that as segments are allocated and de-allocated, small chunks of memory can be left scattered around which are too small to be useful.

As these small chunks build up, fewer and fewer segments of useful size can be allocated. And if the OS does start using these small segments then there are a huge number to keep track of, and each process will need to use many different segments, which is inefficient and can reduce performance.

Advantages and Disadvantages of Virtual Memory

Even though RAM is now relatively inexpensive compared to its cost when virtual memory was first developed, it is still extremely useful and it is still employed in many, perhaps most, computer systems. The key problem with virtual memory relates to performance.