Memory vs Storage: What Are the Differences?

The primary distinctions between computer memory and storage are between volatility and non-volatility, and between performance and capacity. 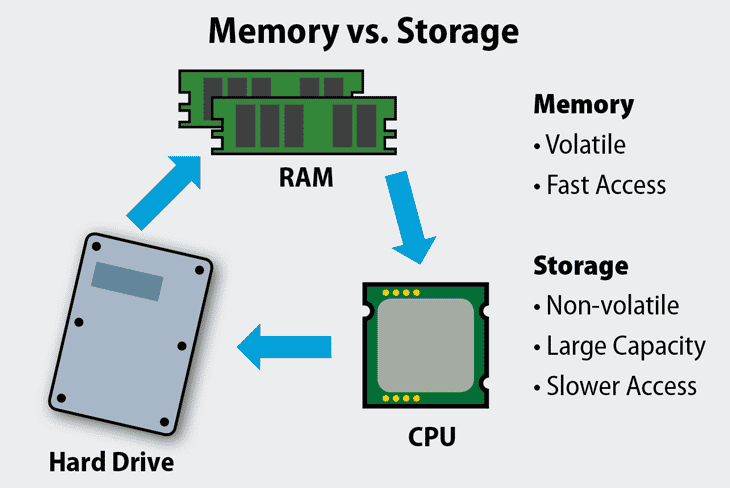 Primary memory is random access memory, or RAM. Memory chips receive and process CPU instructions for computing and storage commands. Processor registers each hold small bits of data, and interact with the CPU to perform mathematical calculations and issue instructions for data operations. (Read-only memory, or ROM, resides on the BIOS chip.)

Primary memory is volatile memory that the CPU accesses directly. This definition includes cache memory, but primary memory is the term most often used to describe DRAM memory modules connected to the CPU by a fast bus. DRAM chips store data for CPU calculations. RAM communicates the calculations as a set of instructions to attached/networked storage media.

This is volatile storage that is dependent on uninterrupted power, so when the CPU powers down, so does the memory and any data stored in RAM is lost. Upon startup, the system accesses the OS and starting applications from storage, and repopulates primary memory. Although DRAM is slower than cache memory’s SRAM, it’s architecture and direct connection to the CPU allow it to transfer data considerably faster than secondary memory, or storage.

Sometimes called CPU memory, cache typically runs on high-performance SRAM memory modules. The CPU can access the faster cache memory to run performance sensitive operations. Cache memory is usually integrated under the motherboard, or on a different chip with a bus interconnect to the CPU.

Cache memory stores instructions and data that the CPU frequently accesses during computer operations. Instead of having to access this repeated information from primary memory, the CPU can retrieve it faster from high-performance cache memory.

Secondary memory is computer storage, where the system retains applications and data on non-volatile media. The CPU is incapable of directly reading and writing data on storage. It sends a read/write (or load/store) command containing a specific storage address to RAM. The storage controllers receive the command and fulfill the request.

So-called secondary memory is in fact computer storage. There are many different types of storage media including hard disk drives, solid-state drives, tape, thumb drives, and optical disk. Tape maintains a presence for active archives and high availability storage in regulated industries. But HDD and SSD are by far the most common types of storage in the data center.

Key Differences between Memory and Storage