What Is Disk Fragmentation?

For nearly as long as computer storage has existed, disk fragmentation and RAM fragmentation have been concerns. Fragmentation is not always bad, as it serves a specific purpose in how some operating system work. However, it can also be an impediment to overall storage efficiency.

In short, proximity matters. An operating system will typically store application and file storage blocks in the next available location on a storage device. This might not necessarily be the storage block that is directly adjacent to the prior block in an application.

Disk fragmentation typically increases over time as read and write operations take place within an operating system. Applications and files are added and removed, so new storage leaves different blocks open in a non-contiguous manner.

Fragmentation is sometimes regarded as being an inefficient use of file storage resources: disk read times are increased as the various locations where a given file of applications need to be found and accessed. On the other hand, the ability of an operating system to rapidly write files on any available storage block, without first re-allocating blocks so there is a sequential read, speeds up file writing operations.

Fragmentation also occurs in system memory (RAM). Application and system processes allocate and use memory in non-contiguous blocks, as existing memory registers are used and re-used. 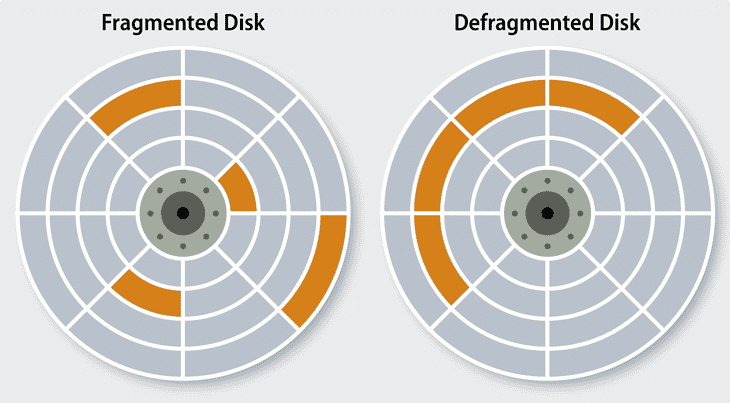 What is the Purpose of Fragmentation?

The purpose of fragmentation is to help an operating system use the available space on a storage device.

In the absence of disk fragmentation, application and file storage need to continuously be updating and moving storage blocks, in order to maintain a continuous, non-fragmented file system. Disk fragmentation is viewed as a necessary byproduct of enabling an operating system to write storage bits as quickly as possible.

Fragmentation occurs whenever an operating system or application writes a file that is not directly contiguous with the preceding storage bit. By definition, disk and file fragmentation is all about storage that is allocated in fragments and not in sequential order.

There are several key types of fragmentation: