Benefits of SSD: Speed and Performance

Flash is a driving force behind the rapid growth of enterprise data storage, and SSDs are the most popular media for NAND flash.

NAND is not limited to SSD media: the memory cell architecture resides on circuit boards, which may be housed in SSDs or embedded directly into a server or other device. Still, the majority of NAND flash is delivered via solid state drives in storage arrays, which comprise the core of enterprise nonvolatile flash memory storage.

Nor are flash and SSD interchangeable terms. NAND flash memory is a type of nonvolatile storage, where silicon memory chips persistently store data with or without and external power source. And SSDs are not limited to NAND flash. They also house memory technologies like volatile DRAM.

In the data center, SSDs are an answer to enterprise workloads whose performance suffered with disk-based storage arrays and server storage subsystems. With the growth of hybrid and all-flash arrays, SSD storage serves intensive workloads with very high I/O performance. SSDs have the added advantage of low energy usage, which helps data centers to keep the energy budget items under control.

What is an SSD?

An SSD is a storage device with no moving mechanical parts that houses flash memory and controllers. SSDs use the same external form factors as HDDs, because they are marketed as hard drive replacements. Using the same form factors does not require massive re-engineering of storage arrays at the factory or data center levels.

Since SSDs have no moving parts, they run considerably more quietly, enjoy faster access time, and lower power consumption over hard disk drives. And better reliability developments have made SSDs as durable as disk drives.

SSDs store information in memory cell arrays embedded on a circuit board. The memory cells are essentially transistors with floating gates. Each transistor has two gates: one is a source that admits a current, and the other is the drain that expels it. The memory cells act as switches to control the energy flow between the source and drain terminals.

Semiconductors called floating-gate (FG) transistors generate electrical charges to the memory cells, whether connected to an external power source or not (over time a powered-off SSD will leak energy). As long as there is sufficient charge from the FG, the data retains integrity.

Memory cells may house one or more bits per cell. In a single-level cell (SLC), the control gate (CG) will sense if a floating gate is charged with electrons or not. In response, the control gate will record either 0 or 1 bytes. Multi-level cells (MLC) work in a similar way.

The SSD not only houses the interconnected memory cells and circuit boards, but also adds a layer of intelligence with the flash controller. 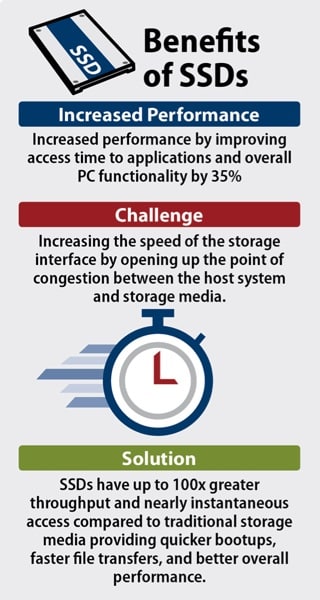 The speed and performance benefits of SSDs are highly significant.

Advantages of SSD: Why Is a Solid State Drive Better than an HDD?

Disadvantages of SSDs: Challenges Amid the Speed

Nothing is perfect in the data storage world, and SSDs are no exception. Their disadvantages include higher expense, limited storage capacity, and a shorter delete lifecycle than hard drives.

What is SSD Good For?

Given these advantages and disadvantages, SSDs are excellent choices for intensive enterprise workloads such as highly transactional databases, web streaming, and dense environments like VDI.

Furthermore, the fast read write speeds of SSD allows them to handle data at the remarkably rapid speeds required of today’s modern business. In fact, businesses can hardly go back to the slower HDD for their top line data usage.

So, is SSD Worth It?

Although the above usage cases are SSD sweet spots in the enterprise, this will raise prices on storage media purchases, and require more SSD swaps than hard drive media. Are SSDs worth the extra time and cost?

In high performance environments, yes. Because SSD form factors are the same as HDDs, replacing disk with SSDs is not a major technology refresh. And because of their higher performance and falling prices, SSDs continue to be a highly competitive storage media in the data center.

Among the benefits of SSD are a much lower failure rate and far faster access time.