Under its original name Next Generation Form Factor (NGFF), M.2 set out to replace mSATA drives, which are thin circuit boards that fit onto a logic board or motherboard. The mSATA standard uses PCIe Mini Card design and connectors to enable SSDs on thin laptops. Some devices still use mSATA, and M.2 has a SATA connector. However, the SATA designs have a top throughput speed of 6.0Gb/s, and M.2 is capable of much faster speeds with faster buses like PCIe x4.

As noted above, the M.2 is a solid state drive; a key fact about this storage technology is that it lacks an enclosure. It’s a small form factor circuit board that is internally mounted in a laptop, desktop, or server. M.2 can connect to multiple types of buses, which are the data pathways between the M.2 and connected computing components. The most common M.2 buses include SATA 3.0 and PCI Express (PCIe); and USB 3.0, which is backwardly compatible with USB 2.0.

The M.2 spec allows for different physical sizes and storage capacities. Speed depends on the type of connected bus: M.2 SATA can support speeds up to 6.0Gb/s, and up to 1GB/s per lane with PCIe 4x and NVMe. The spec also covers two M.2 controllers: AHCI for SATA compatibility, or NVME for high SSD performance.

What are the types of M.2 Connections?

In server environments, the most popular connection types are SATA and PCIe.

The PCIe spec has been around for a while: standards group PCI-SIG introduced PCIe 1.0a in 2003. Today its most popular version is 4.0, and PCI-SIG has ratified PCIe 5.0.

M.2 Connections and their Usage: 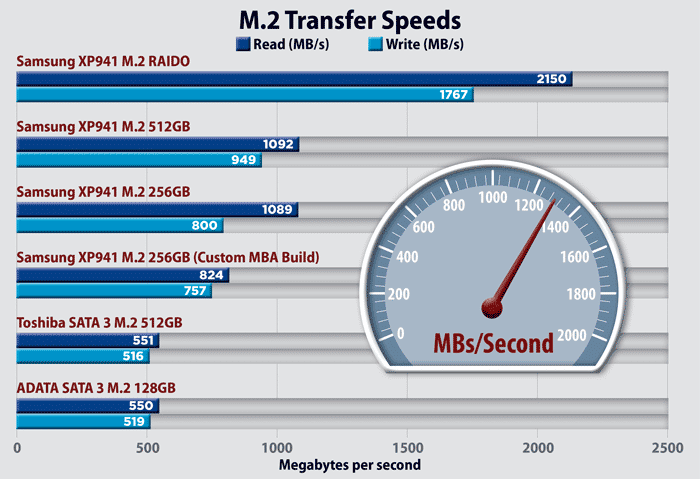 The M.2 specification is used on SSDs with some fast read write times.