What is Direct Attached Storage?

However, there are a number of disadvantages to direct attached storage, which means that it is not the best choice of storage in all circumstances. Let’s look in-depth.

How Does DAS Work?

But direct attached storage does not have to be connected to a computer system internally. It also includes external drives or drive enclosures (which may contain multiple drives), typically connected using USB, eSATA, SAS or SCSI to an individual computer system. 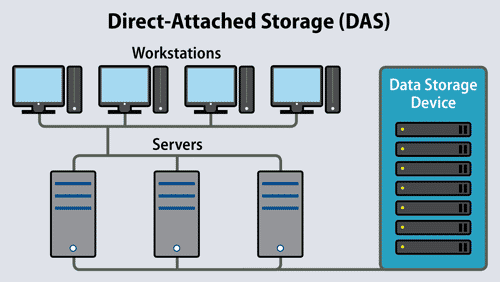 As the name suggest, Direct Attached Storage is closely connected to the computing device it servers, rather than use the more indirect network connection.

Performance Differences and Use Case: SAN, NAS, and DAS Storage

It is not possible to make categorical statements about the performance differences between SAN, NAS, and DAS, because performance will always be affected by hardware and its configurations.

For example, a DAS setup which uses a number of high-speed SAS disks in a suitable RAID configuration will offer vastly superior performance to a DAS setup consisting of a single 5400 rpm IDE drive. However, it is possible to offer some general conclusions:

Storage area network solutions use a dedicated high speed data network (usually based on fibre channel or iSCSI) to move block-level data around the storage environment between servers and expensive – but fully featured – SAN storage arrays. The features that SAN arrays offer include deduplication, compression, encryption, and various availability services such as backup and site mirroring.

SANs offer very high storage performance, reliability, and data availability, but because SAN storage arrays are very expensive and require management by a storage specialist they are only suitable for large organizations with sizeable storage budgets and IT support teams.

Network attached storage consists of computer hardware (usually a storage appliance), storage devices such as hard drives, and software which manages the storage devices, arranges data backups and redundancy (usually through some RAID configuration), and provides networked access (as well as restricting access) to these devices (often through Active Directory).

The computer hardware is optimized for managing and providing access to data, and that means that NAS usually offers much better performance than direct attached storage in environments where data needs to be shared by a number of different users. NAS can also be scaled up very quickly simply by adding more NAS devices to the network.

This makes NAS ideal in small and medium-sized businesses where data often needs to be shared between groups of users, and where storage requirements may increase rapidly as the company grows.

The main drawback to NAS is that storage data is carried over the organization’s normal (usually Ethernet) data network. This means that network congestion and performance degradation can be significant if users are accessing large files or moving large amounts of data to and from the NAS.

Direct attached storage generally offers high storage performance to the computer system which it is directly attached to, because the data is located close to the system’s RAM and processor. And because it is not affected by network congestion, and because it can take advantage of fast computer bus interfaces such as SAS and SATA.

However, if DAS is attached to a storage server then data will still have to travel over a network to the computer system to request the data from the storage server, and that means that it will still be subject to network congestion.